Lost at the Dahlia Farm....

Painting on a Dahlia Farm.....
......doesn't really require much movement.  Standing in one spot will give you any number of ideas for paintings.

I was at a workshop with the immensely talented Colin Page (HERE) and back at a spot I had been to in 2013.  That was another workshop of his and, when he came around to look at our paintings, he looked at mine and said, 'I have only one thing to say to you....think "lyrical".'  Then he smiled mischievously and walked away.

For two years I have been pondering what he meant.  Sometimes I got a bit of a glimpse of a meaning but no clear answer....so, of course, I bugged him about it this time.   When I came away from this workshop I actually think I got closer but don't think I can yet put it into words.  I think it has to do with what a writer does when being poetic.  With words it is a unique and creative linking of word meanings, sounds and literary picture making.  In painting it is the same thing but using design,shape, tone and color to invite people into your pictorial world. 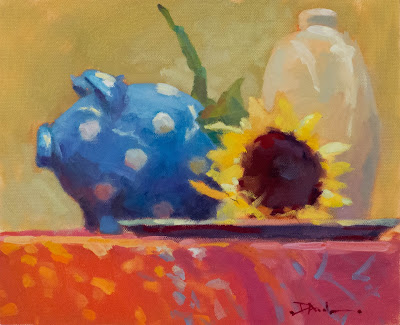 Because I was leaving Maine in a few days I switched to Gamblin's Fast Matte pigments so my paintings would be dry in time to be packed.  I don't think I got the hang of using FM paint.  After two paintings I abandoned trying because, even though they got tacky while I was painting them, in three days they still weren't dry enough to pack.  Plus they didn't exactly 'flow' like real oil paint.

This was my second attempt using them and was better than the first, which I may still post someday.  I confess that I did sneak in a little non-FM Quinacridone Red into this one  for that pinkish cloth.

Flying back I was thinking about a person who has taken several classes with me and is a retired chemical engineer.  Who better to ask about what happens when paint 'dries'?

His name is Chuck Witham and he spent some time writing up the following short description of what happens to paint on the way to being solid and ready for varnish.  At my request this is a simplified version for non-techie consumption.  Chuck said he could have gone into much more depth of how and why certain pigments dry faster than others or all the chemical changes that occur within the paint structure.  I didn't know, for example, that at one point it gives off hydrogen peroxide.

Anyway, for your interest and edification this is what happens.  Remember it the next time you are in a hurry to get a painting into a frame.  Thanks to Chuck.

Before we start, we need to understand what the paint on the canvas really is.
* Pigment.  Finely ground particles of an insoluble material in a variety of colors.
* Oil Medium.  Polyunsaturated fatty oil (linseed, walnut or other oils known as drying oils).
* Thinner.  Any volatile organic solution (turpentine, Gambol, Terpenoid, etc.)
The pigment and oil is mixed together until a uniform mixture is achieved.  This mixture is placed in sealed tubes until used by the painter.  When we squeeze out an amount of paint, we add thinner until the desired consistency is reached and spread it on our picture.

Now the oxygen in the air can permeate the oil and start the process of curing the oil through oxidation followed by cross linking of the oil molecules.  The result is a firm flexible film that is stable in most normal environments.

Can I speed up the 'drying' process?
Room temperature air blown over the surface will help evaporate the thinner as it reaches the surface, and provide an ample supply of oxygen to start the curing.  Providing a gentle heat (100 degrees F) to the BACK of the picture will aid in the removal of thiner and increase the rates of oxidation and cross linking.  Do NOT blow hot air on the paint surface as this will cause the paint to 'skin over' and drastically INCREASE the 'dry' time.

There you have it.  Hope it helps.

Thanks for reading and checking in. 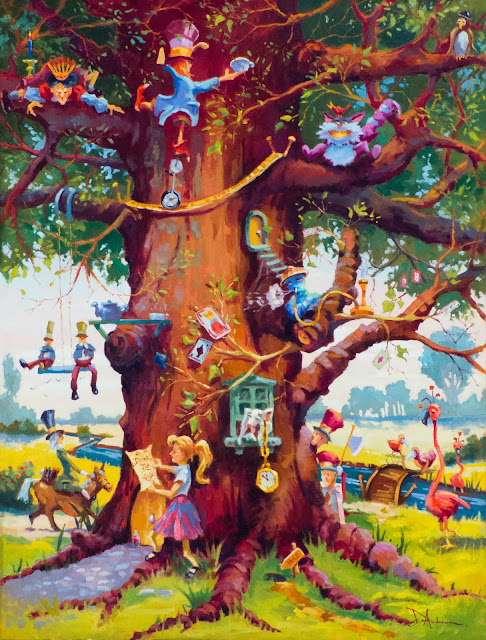 Alone in a cabin in Maine....
....I spent the evenings contemplating what I was going to do.  Roby-King Gallery had decided to make their December show based on the 150th anniversary of Alice in Wonderland.   This was not exactly in my comfort zone.....but why not give it a whirl....

One evening, with sketchbook sitting in my lap, I began to let my pen wander across the page with only a minimum of conscious control.  As the drawing developed I realized that I was putting down what was going on just before Alice happens to enter Wonderland.

From where she is she can't really see Lewis Carroll riding by behind the tree, or the other characters behind and above her.  It's one of those quiet moments just before something momentous happens.


We have all experienced these pivotal points and how, on one side of that life changing event we are going along pretty normally, and on the other everything has dramatically altered.

Here is the initial sketch plus some of the extra drawings I did to work things out.  Not all made the cut.  The opening of the show is this Friday, December 4th at Roby King here on beautiful Bainbridge Island, WA. 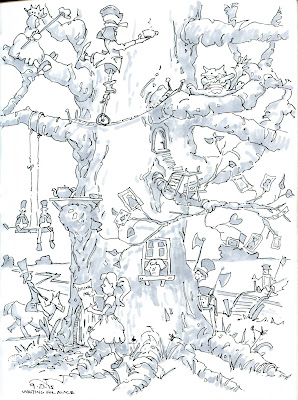 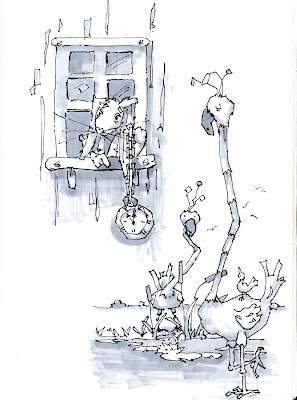 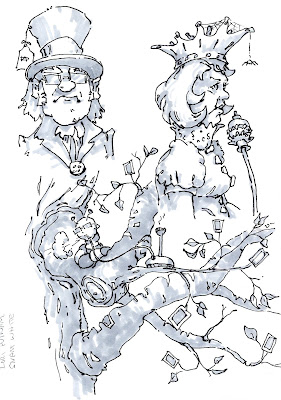 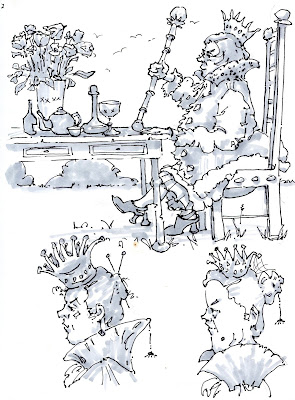 There are more drawings but you get the idea.  Thanks for stopping by.  Leave a comment if you have time.

ADDENDUM:  Here we are on opening night.... 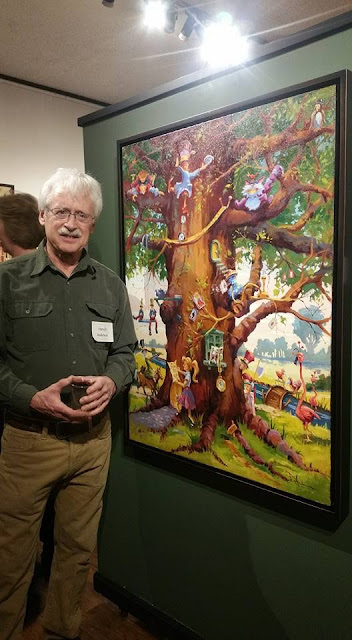