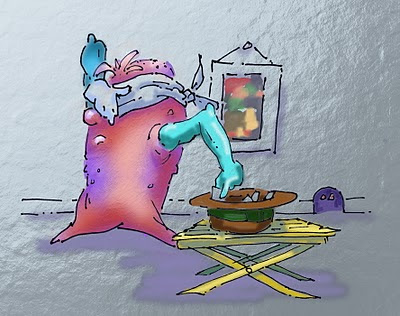 The Free Painting Contest has Ended!
Deep in a hidden underground vault, sworn to complete secrecy, our highly trained staff has used a sophisticated random generator to carefully select a winner from almost fifty entrants across the country.  Transported by trusted carrier pigeon to our central office the sealed envelope was opened with shaking hands.  Even WikiLeaks didn't know!


And the WINNER is: R Teske!!  Congratulations!
BUT!  Since there were so many applicants there is a Consolation Prize.  Once again the staff had to go underground and pick another winner.  The following painting, A Bunch of Us Are Getting Together 8x10,  goes to: J Bentley!! 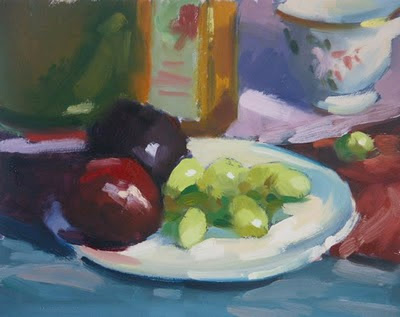 If you didn't win I want you to know how much I've enjoyed your emailed comments and be assured that I'm going to do this again.  Just stay tuned...
Posted by Darrell Anderson at Monday, January 31, 2011 1 comments 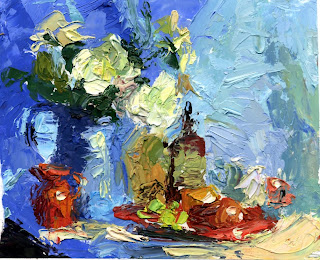 First Version:  3.5 x 4.5 inches, palette knife on paper.  A palette knife painting usually ends up with lots of pure vibrant color as once the paint has been placed it's simply there....no fudging the color with a brush.  It's just mix and place, mix and place. 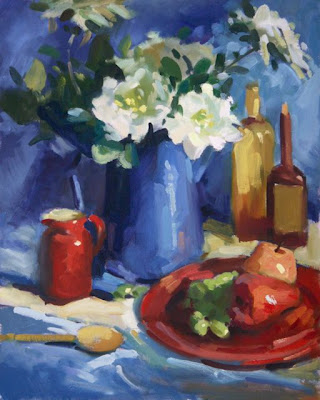 Second Version:  16x20, demo with a brush on gessoed board.  These paintings were done a week apart.  While the forms are more easily recognizable and the color ended up pretty similar, it loses some of the abstract quality.  I like them both as different expressions of the same still life.  Someday I'd like to do a palette knife painting in a larger size but I'll have to save for some paint as they use a lot.  A bit more like sculpting clay...but with thirty dollar tubes of paint.

Tomorrow will be the announcement of the winner in the painting give-away.  There will also be a surprise coming with it.  I can't wait.
Posted by Darrell Anderson at Sunday, January 30, 2011 1 comments 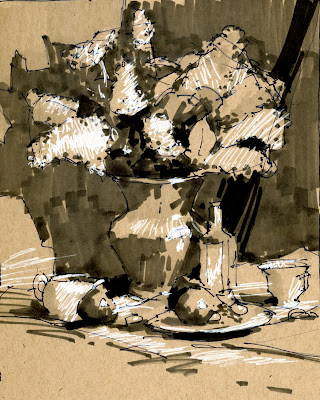 This is the toned paper demo using warm gray markers done for the marker workshop we had on Saturday.  What a great group.  Everyone was willing to throw themselves into the unknown and try whatever I asked of them.  That takes courage.

Speaking of courage.  RN, the owner of Oil and Water Arts, certainly exemplifies that.  Three or four years ago, while riding his motorcycle in Oregon, he was hit by a semi that was passing him and didn't allow enough distance when pulling in front.  The long and short is that RN lost two fingers on his left hand....details of which you don't want to know.

Then we went into an economic downturn which has greatly hurt the arts...and art stores.  Despite returns that were initially not good RN decided to weather it out and his store and school have shown remarkable success.

Two weeks ago we had some heavy snow.  The roof of the little two story mall began to leak.  Being a good neighbor, RN decided to go up on the roof and move the snow to prevent damage to other businesses....his own was fine.  Coming back down, the ladder slipped and he fell about 15 feet onto a cement/tile floor.  Yesterday he had surgery to fix the four broken vertebrae.  Monday he will have his shattered right heel operated on.  The left heel, ribs, and head are healing on their own.   He's had two weeks of unbearable pain because the hospital missed the broken vertebrae. (!)

This is the clincher:  Less than 24 hours after surgery we were talking to him on the phone and he had new ideas about how to make the store/school even better.  A Timex watch could take lessons from this man.   Tick, tick, tick...
Posted by Darrell Anderson at Sunday, January 23, 2011 2 comments 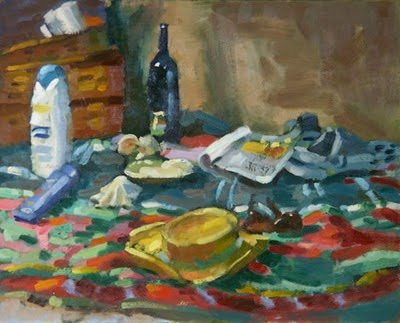 Did you know that it rains in Seattle?  My friend Gillian, desperate for a hint of sun, set up a beach scene for our Thursday painting group to work from....indoors, of course.  She turned it into an outdoor scene but, since I'm somewhat of a slave to reality, I painted what I saw.  Ah, the 'tyranny of reality' as Robert Genn would say.  For you painters, this was done without any line drawing....only the dark or shadow shapes were blocked in quickly and then I began with color.

Before doing the piece I sketched two with markers.  Here is one of them using warm gray markers: 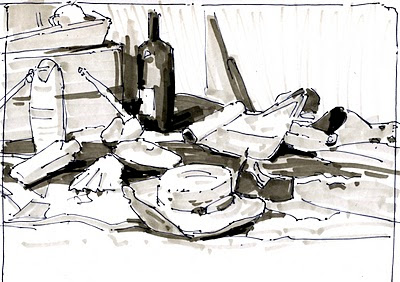 If you compare the two you'll notice that in the painting I increased the distance from front to back to give it a more spacious feeling.  The drawing was only carried to a stage where I knew where I was going with the painting.

The marker workshop is this weekend so I'll post some of the folks drawing next time.

Remember to enter for the free painting.  Go to my actual blog (click HERE) to find out more....look at the last two posts.
Posted by Darrell Anderson at Thursday, January 20, 2011 0 comments 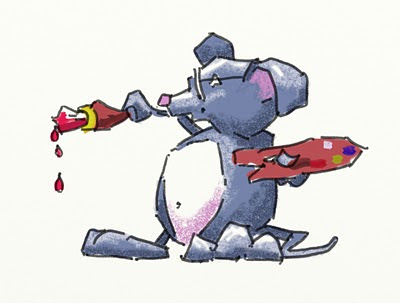 Oops....I didn't think of those of you who use an outside mail server.  The directions to enter for the free painting (last blog entry) would be frustrating for you.  Here is an alternative.  Click HERE and you will be taken to the 'Contact' page of my website where you can see the actual email address to use.  Enter now.  There is still time.   If you've already entered....thanks, I'm having fun with this.

The drawing is digital with absolutely no purpose in mind other than to entertain you.
Posted by Darrell Anderson at Wednesday, January 19, 2011 0 comments

'Celebration' With a Painting Give-Away! 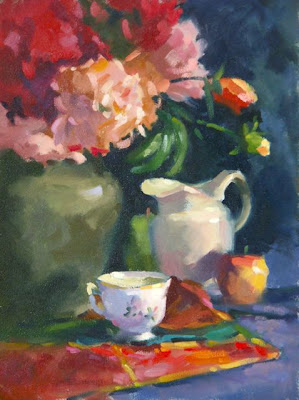 Sometime in December this blog published it's 100th posting.  Now that's not a lot of postings but it seemed like a celebration time to me.  That plus beginning a new year has left me wanting to give away a painting!

This painting, appropriately titled 'Celebration', was done in November 2010.   If you would like to be part of the drawing for this piece here is what you do.  Go to my blog by clicking HERE.  Once there, look for my picture on the right hand side and click on 'View my Complete Profile'.  You will find a link for emailing me on that profile page.  Send me an email with "I'm in!" in the subject line and you will be part of the drawing to take place on January 31st.   Easy.  I'll even ship if for free to anywhere in the U.S.  Outside the U.S. we'll work something out.

Classes are Beginning!  This week my painting classes resume.  For the first time I'm opening the subject matter to landscape photos students want to bring in as well as the usual still life.  On Saturday is the workshop 'Value Sketching With Markers', based on my book.  Contact Oil and Water Art Supply for more info.
Posted by Darrell Anderson at Monday, January 17, 2011 0 comments 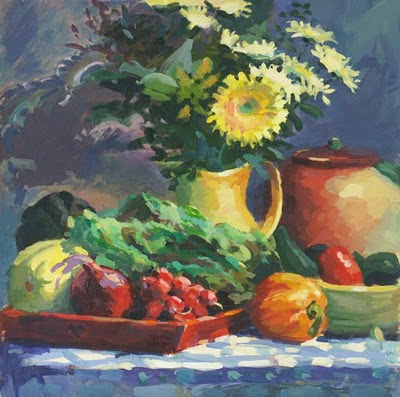 Tomorrow I may wake up, see a glaring error and wish I hadn't posted this.....but this is today's effort set up by a painting friend, Wendy.   An amorphous pile of red leaf lettuce was difficult to make convincing but I think it gets helped along by being surrounded by veggies and in that context becomes 'lettuce'.

This is acrylic which I like to use for several reasons.  In this case I wanted to experiment with color changes which, because the medium dries so quickly, makes it easier to quickly throw on a color to see how it works and not have everything get muddied around.

Painting garden stuff I'm reminded that the days are getting longer once again and every time I remember it I have a little internal celebration....often several times a day.   This is something folks in the Pacific Northwest understand.
Posted by Darrell Anderson at Thursday, January 06, 2011 2 comments 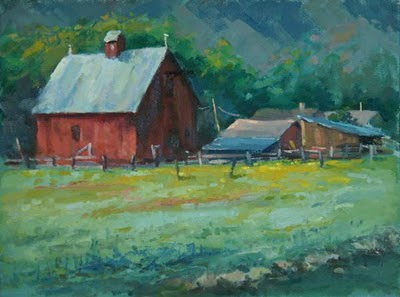 Isn't it fun to find money in an old pant pocket?  That's sort of the feeling I get when I run across an old 'iffy' painting and realize that with only a few strokes it's a keeper.  Not only that but it resolves one more thing in my life!

For those that are interested I made the roofs more varied in color, added a little blue in the grass and some more sparkle in the yellow 'whatever it was'.   Mostly just correction of values.  The rocks almost got eliminated but keeping them gave the pasture a more interesting shape so they stayed.
Posted by Darrell Anderson at Tuesday, January 04, 2011 1 comments 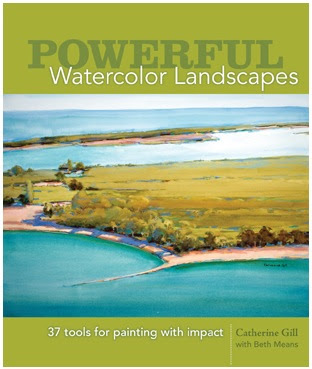 My very good friend, and in my estimation the finest watercolor instructor I know of, has just been published by North Light Books.  (She co-authored the book with Beth Means.)  While the many paintings printed in the book are watercolor or mixed media, I would recommend this to painters in any media (I ordered one...).  Cathe has a unique way of breaking down complex compositional and painting issues into easy to understand solutions no matter what tools you work with (she is also an excellent oil painter and print maker).   I predict this will be a foundational book for every artist's library.

Having spent countless hours painting with Cathe I've watched her take scenes of what I saw as nothing and turn them into inspiring works.  Just look at the front cover of the book.  What might have been humdrum has been changed into intriguing shapes and color.  You can take a look at her book HERE.  Get one from her website and receive a signed copy plus an extra freebie.