Portrait Painting.....
.....happens every other week over at Millard Davidson's studio (see his work HERE).  I had noticed this tree a couple of weeks before at his place and was just waiting for a day that the sun was cooperative....or were the clouds being cooperative?

Anyway, during our portrait session the sky had mostly cleared and the Big Leaf Maple was clearly enjoying the moment.  I had thought ahead (take note) and been driving around with a panel I thought would work, so I set up the easel and grabbed a #12 flat and blasted away at it before the clouds moved back in.

As I painted a part of me was trying to think of a name, assuming it turned out.  Everything I thought of seemed too static or cliche'.   Toward the end I noticed the smaller trees that had sprouted from the thousands of maple seeds this thing would have dropped each year.  It was obviously a dance celebrating the return of the sun.....or something.  The big maple was like the Pied Piper.  Perhaps I'm being a bit anthropomorphic.

Painted on a 12x24 piece of MDF that I had to used Miracle Muck to glue on a piece of Frederix canvas . The best part was I got to use my brand new 'why did I buy this?' tube of Gamblin Cadmium Green for the sun struck moss on the limbs.  Nothing else glowed enough to work.

Thanks for looking.  Back soon. 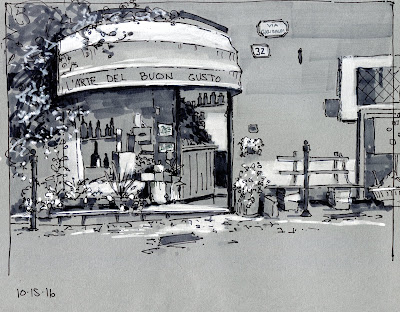 Orvieto, Umbria, Italy.....
.......is full of narrow winding streets, unexpected archways and out of the way shops.  We were there for a week ahead of the workshop I was teaching so I could get over the jet lag.  I became somewhat of a human being somewhere around two in the afternoon and headed out to sketch a bit.

It is fun for me, while one part is doing the drawing, for the other part to just enjoy watching it fall together.  I looked first for where I could find a 'yardstick'.....something in the scene easy to draw but could be used to figure out where everything else should be.....and I chose the long side of the doorway on the right side.  Then I began, but didn't finish right away, the step up into the store from street level.   At that point I had a sense of how it was going to fit together and hopped over to the little pumpkin sitting on a box next to the door.

In color, and I did a color sketch later, the orange of the pumpkin in front of the gray brown of the boxes and the green of the foliage was pretty outstanding.  In markers and gouache it just became part of the pattern of plants, boxes, and wine bottles.  The canopy I slowed way down to do so I could keep the gentle curves and overall shape.

It was a scene with a lot of stuff.  The challenge was to keep all of that 'stuff' in check so it wouldn't overwhelm the scene but yet give texture.  The street alone was all cobblestone which is only subtly stated.  Oh, and there were lots of people passing by but none stopped long enough to get put in.  The shop owner kept peering out through the display trying to figure out what I was doing. 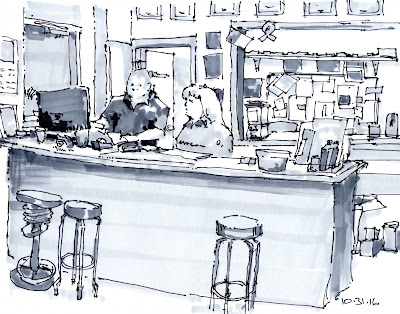 A couple of days after getting back I had to get our transmission serviced.  The woman had some computer questions and the owner spent a short time, maybe three minutes, showing her what to do.  With little time to think I grabbed the sketchbook and got just the basics of the figures in before they began answering phones and running around the office.  Occasionally they would return to positions similar to this.

My 'yardstick' this time was the edge of the computer screen and the doorway behind the two of them.  Then I put in all the other parts of the scene and used the markers to provide form and guide the eye.  Notice how the computer screen and the guy's shirt are the only placed where I used the darkest marker.  Your eye can wander around but gets sucked right back to that area.  There were lots of dark areas in the scene that didn't get stated just to keep that effect.

By the way, I have a Marker Workshop this Saturday with a couple of open spaces and I have the materials you need for sale (at cost) so all you need do is sign up and show up.  9:30 to 4:30 on Saturday, March 25, 2017.  Contact the Winslow Art Center HERE.

If you can't make the workshop be sure to check out my book (recently expanded and updated) in the page tab up at the top.

I also have a portrait workshop early in May that you can also check out.  Limited spaces. 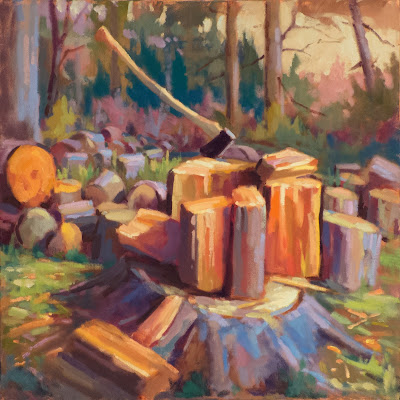 Last October we had this tree taken down....
.....and there it sat until the sun began to return the last couple of months.  At ten in the morning for only 45 minutes the sun would hit at just the right angle through the trees to light up the stump and the wood I had been splitting.

So, once I had decided to paint it, each day there was any sun I would haul out the easel and gear early enough that I was ready to paint when the sunlight poured through the trees.  One session to draw and block it in roughly, one to adjust the color shapes,  one to add some detail, and then....Oops!  The yard guys we hired for a clean up decided, while I was away, to help me and began splitting it up and make little piles.  Everything changed.  Nice guys.  Wrong timing.

Fortunately it was within a session of being finished and there was enough information already down to make it work.  So one more short session in the studio and this is what I have.

In the Pacific Northwest winter 'sun' the values can get really dark so I raised the overall values and pushed up even more on the darks, relying on temperature shifts to make the form happen.  I enjoyed doing this one as I had a lot of leeway in choosing color possibilities.

Thanks for looking.  Back soon.