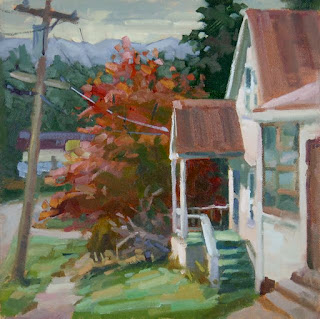 By the end of the day it had turned cold with a bitter wind.  Heavy snow was approaching and the puddles were freezing crystals on the surface.  Just a bit earlier, however, the weather was milder, almost approaching warm if you had two jackets, warm up pants, gloves, hat and a hand warmer.  It was the last days of Fall.

Attracted first by the red tree and then by the complexity of the green porch up against that red, I stopped for an hour or two to paint this.....although it seemed longer in the wind.

Into the 1970's, coal was still being mined in Roslyn....that was a few years before it became the set for Northern Exposure.  Eons before that (careful, I like natural history) it was an island that ran into what would become North America.  The swamps surrounding that island became the coal under the town and in Black Diamond on the other side of the mountain range.  The Cascades came later, rising up to split what had been the island mass, leaving half of it on the west and the rest on the east side.  Near Cle Elum are outcrops of sandstone, the old shoreline.

So I drove back that evening, passing through an almost blizzard....but it felt great to have gotten away for the day.
Posted by Darrell Anderson at Monday, November 21, 2011 0 comments 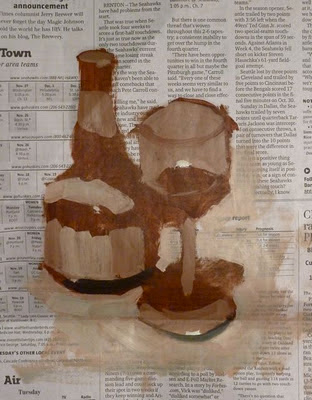 Even after my 'you can do it, don't hold back!' painting pep talks I watched folks freeze up when they approached the canvas and I didn't know what to do to help.  Nothing worse for an instructor than not to know how to get something across.  Then, one morning at 4 AM (because that seems to be when my head feels we should be thinking rather than sleeping) I had an idea.  Why not give out something that's not considered precious and see what they do?

Magic is what they do.  Needing little encouragement they let it fly all over the newspaper and, when they had filled a sheet, tore it off without a thought and did some more.  First we doodled, then we doodled some more.  Finally we did silhouettes and moved to rendering.  They begin like this: 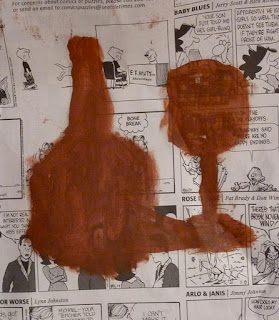 This is just burnt sienna and solvent.  When that is blocked in we add white to create form as fast and easy as possible.  Here are a few examples of work to give you an idea.  (Why didn't I think of this before...) 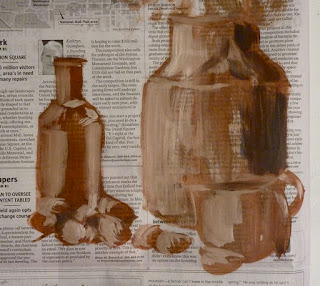 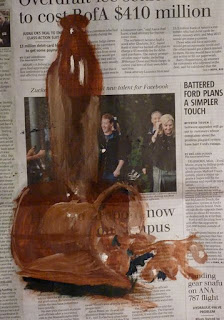 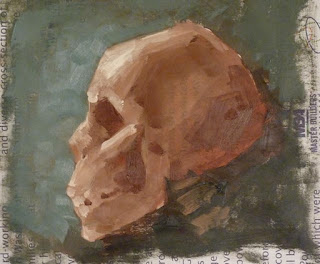 The darker portions and around this last one are Indigo mixed with the Sienna just to make darks.  Give it a try.  Great warmup exercise to free up your arm and your head.

You say you don't paint?  Isn't it about time you did?
Posted by Darrell Anderson at Monday, November 14, 2011 5 comments 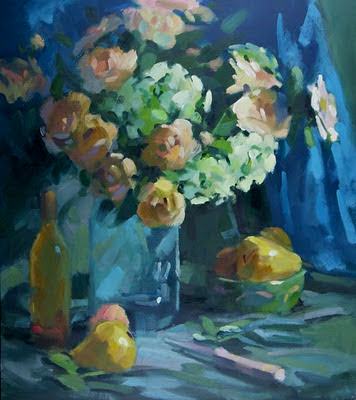 Fifteen feet away a five piece band was playing.  People swirled around me meeting and greeting.  Occasionally I had to shoo folks away from standing in front of the still life setup so I could see it.  A little kid kept running up to share his latest drawing.....'see....this is where the bad guys blow up the sun'...  A few wanted to talk to me about painting, and a few others wanted to know how I could paint in a maelstrom.  (Beats me.)

All in all, last Friday's Artwalk was a lot of fun.  The music was good, the people were nice and the energy was positive....except for that sun destruction thing.

When I look at this piece I'm reminded of a comment by Bill Reese who said, while showing us around the artwork in his home, 'There is only one work I've done that I wouldn't change if I did it over', and Bill must have done thousands.  No matter how well we do things we could make them better.   It must be what keeps us trying with whatever we attempt....
Posted by Darrell Anderson at Tuesday, November 08, 2011 1 comments 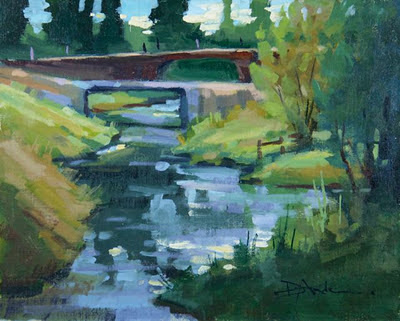 'Take me home country roads'.....'the high road and the low road'.....Robert Frost's 'road less traveled'.....all thoughts I had but the most frequent one while painting this was 'I wonder where they go?' and 'If I just started driving on one of them and didn't look back....'.  It must be all the possibilities that roads possess that makes them appear so often in our music and literature.  Hope and possibility.  Isn't it what keeps us all going....

Of course not everyone has the wanderlust gene.  Some folks have the 'baked potato in front of a warm fire let's stay at home' gene.   All good.

OK.  For reasons that will be revealed if you click on the link,  that reminds me of a TED talk my good friend Gillian sent me.  This a fascinating piece that kept me captivated as much by the subject as the unique person that was presenting it.  When I have my next life I would like to live it by following the road of my instincts as much as she has.  You can see this inspiring video HERE.