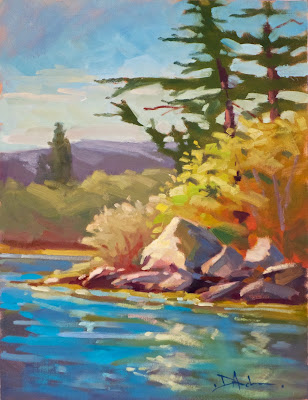 The warmth of the Maine afternoon sun....
.....was just waning when I got my big idea.  It was an idea I had been wanting to try for several years but when I saw a photo of Colin Page doing it, and on this very lake, how could I resist?

My only problem was I didn't have a boat.  Yet here I was staying in a cabin not 60 feet from the shore and there were, after all, some kayaks hanging about....and one was open cockpit.  Admittedly there was not a place to set up my easel in it and it didn't have an anchor....and the wind was blowing hard.

And yet I had to do it.  So I found a hunk of cord and an old propeller to use as an anchor, threw my stuff in the bottom and headed up the lake into a brisk wind.

Finding a sheltered spot I carefully climbed over my gear to the front of the boat and threw in the anchor and played out the line.  Making it back to the seat, again carefully, I jammed my palette between my legs and began painting.  Only one foot was wet by this time.  Not bad.

All was going really well until the paddle fell overboard.  The physics of a kayak are interesting.  Something about for every action an equal and opposite reaction kept coming to mind.  Reaching for the paddle caused the boat to move in the opposite direction.  The paddle was now further away.

Scooching my butt to try and wiggle me over had a similar effect.

I began using my hands to paddle to it yet each time I got close the action of my hands made it drift away again.   The wind was beginning to catch the blades.

As a last effort I grabbed my largest and longest brush, stretched out as far as able without getting swamped and tickled the paddle back to me.  My seat was now wet.

So.  Basically that's how I painted this one....but I haven't told you about the cramp in my leg from being bent up around the palette for so long or how the wake from motor boats came over the side.

I came back smiling anyway....they call this plein air.

Be back soon with a larger piece I've been working on. 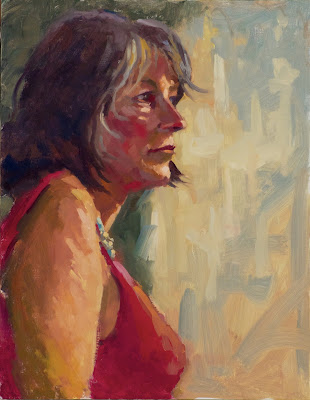 Vocal artist, attorney, supporter of the arts,......
......I first met Helene when she was hosting art displays of a mutual good friend, Bill Johnson, at her home.  She probably appears a bit older in life than you see in this painting, but I paint what I see....and sometimes what I want to see.

I think the first task of an artist is to convey a feeling, and, secondly, to make an interesting painting.   Hopefully I did both of those successfully.  After that, if you can get a likeness, so much the better.    We are all working toward better.

The colors are pushed slightly and the reds, especially in her face, are not that intense.  I still like the result.

Thanks for looking.  I'll be back soon with some of the Maine paintings.