Giving Up Too Soon 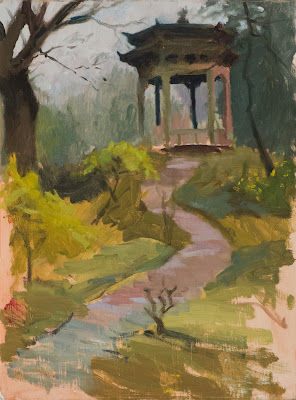 Early One Morning....
....I think we got up around 4:30 everyday.....I was sitting in a fog shrouded park in Hangzhou, China, trying to get in some painting time before breakfast at the art school where we were staying.  Too rushed to finish I grabbed the panel and my stuff and rushed back, disappointed with the result.  Once back in the States I threw it in a box and forgot about it.  It was 1993.

I have seen Sunny Apinchipong sail a beautiful piece into the woods, Ron Lukas scrape and trash works that made me drool, Colin Page and Diana Shynne do the same and William F. 'Bill' Reese tell me that of all the pieces he produced during a very prolific life that there was only one he wouldn't change (its on the cover of his book).  Once I drove my car over a piece....but of course that was an accident....

(Have I done enough name dropping?)

The other day an artist friend was cruising my studio and pulled out a painting from a box and told me she liked it.  Since she is an artist I particularly admire (no names but it sounds a lot like Catherine Gill) this prompted me to do a quick search to see if there were others that I had overlooked.  Many had already met the trashcan but some survived.

Since I think it is fairly common for artists to lose objectivity about their work and send them to the landfill before their time....well, at least it is common for me....I thought I'd show a couple I dug up and have never posted.

These pieces are not finished but they are just as they were when thrown in a box and forgotten.  I found quite a few but I will only post a couple.  Under fresh eyes they all have things I would like to follow up on and I realize I'm not a very good judge of my work.

Try this yourself....I'm sure you have some.  Then post them somewhere.  Start a blog!   Or send a pic to me.  I'd like to see what others have passed by.  For better or worse, here are a few 'almost keepers' that were lost in the 'archives'.

Thanks for looking!  There will likely be more....