Boatyards are....
...an admitted fascination.  I'm not sure what the attraction is but I know there is no limit to the shapes, detail, color, movement, sense of adventure and unique people there.  This one is the Port Townsend yard where boats from up and down the west coast can be found.  This time there were more than usual from Alaska getting all cleaned up.

I was there with my good friend Mick Davidson and we spent the first half hour just wandering around looking for ideas.  The possibilities were all over but when I saw this scene I felt intrigued and, though I felt it too complicated to pull off very well, I walked back there with my shellacked birch panel and dove in.

Composition:
It took a bit but I finally figured out what my attraction was.  It was the sense of space and depth, from the temporary stairs and scaffolding back into the distant hill and sky.  I felt expansive looking at it.  Here is how it went in my head.  If I look to the sweet spots (divide the canvas in thirds and look to where the lines cross) for possible focal points, this is what it looks like:

The colorful buoys and the detail of equipment was the obvious spot, but there was another one in that upright structure in the background boat.  The buoys won.  Not much else attractive in the other two circles.

Then I wondered about eye travel through the piece until I noticed that the stair structure was similar in size and construction with that thing on the back boat.  My eyes kept going around the scene and pausing briefly at each of those areas....but still anchored on the buoys.

Toward the finish I thought again about the sense of space and found the distant hill and shoreline on the left side and the masts from the sailboats toward the right added an additional feeling of depth.  And, of course, the sky.

This took about two hours, so after a bowl of soup with Mick I went looking for another.  I liked the intense backlight in this one, although I almost went blind doing it.  One of the workers stopped by and told me that this boat was derelict and going to be cut up.  Too bad I don't remember the name, so I titled it "Her Last Stand" 10x15.  You figure out the composition.  Because of the sun this was seat of the pants painting. 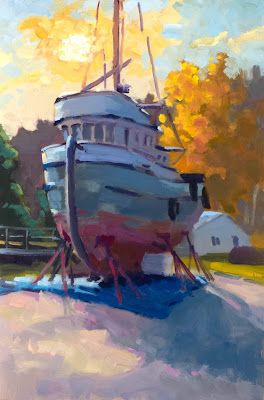 Thanks for looking.  Back again soon.