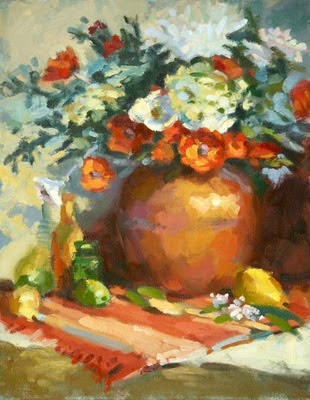 While folks in class were painting I didn't want to hang over their shoulders too much so sat and painted this during the lulls.  Another of the five setups painted on a fairly small canvas board.

By the way, if you have emailed me since November 15th it probably didn't get through as the mail server had issues.....which are now cleared up.

Have a good Thanksgiving....if you are in the U.S......or have a fulfilling week wherever you are.

'Sometimes we need to just pause and let happiness catch up with us.'  The Dalai Lama
Posted by Darrell Anderson at Monday, November 22, 2010 2 comments 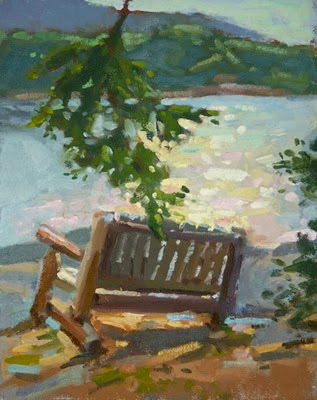 This is a study from the Maine trip in September....and a gift for Kathy whose cabin we stayed in.  The old bench was built by her parents many years ago and, even though they are now gone, the bench is still around but leaning a bit.  The 'ledge' is an outcropping of bedrock jutting out into Lake McGunticook and has been there since before the English landmass separated and drifted across the Atlantic......now that's old.

Here are two forest studies from western Montana that were done just a few feet from the cabin.  It's a fun challenge to just walk out, plop down and paint whatever is there and try and make something of it.  These are both 8x8 oils and took about 25 minutes each if I remember correctly.

The rocks (more geology) were dropped by the mile high glacier that once covered the area and left Flathead Lake behind. 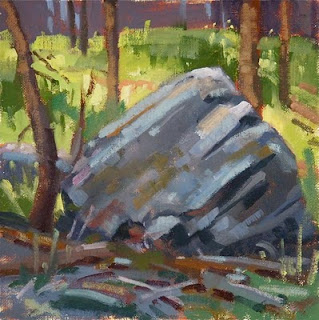 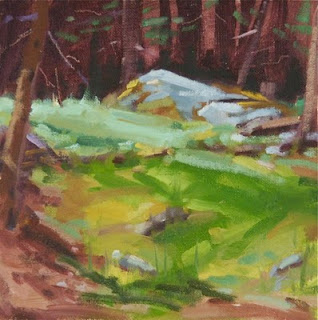 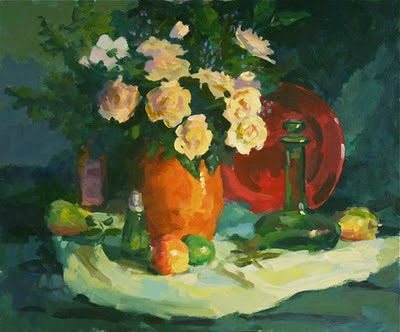 Last night I began wondering about still life painting.  It's a great way to learn to paint  (no model to pay, it stays in one place, no bugs to swat) but where did this rather odd activity come from?  According to Wikipedia and other sources, representing everyday objects with food began with the Egyptians, can be found in Roman tile work, fell out of style and was revived in the Middle Ages.  During the Renaissance and the increased interest in the natural world it experienced a great revival which seemingly hasn't let up.

While it still seems a bit odd to me, who am I to question thousands of years of people who have gone to garage sales and Goodwill for second hand junk and surrounded it with fruit and vegetables just for pleasure.   I will admit that it's a great excuse to play with paint and color and the paintings are somehow more interesting to look at than the objects themselves.

I painted this as an instructional example.  It was done in acrylic and is one of the five current setups we are using--which get changed every two to three weeks.  The next painting session will begin January 18th.
Posted by Darrell Anderson at Friday, November 19, 2010 0 comments 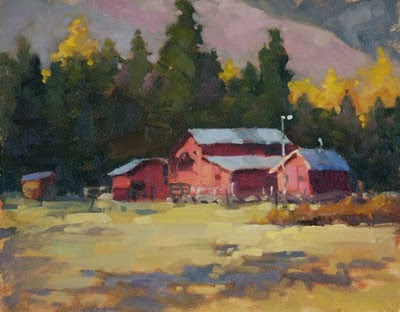 Two weeks ago I made a whirlwind trip to Montana to close up the cabin but spent most of the time south of Missoula painting with Bob Phinney.  On a dream of a Fall day we found these red farm buildings and had to stop.  I've been advised to never paint red barns because they are such a cliche', but I think it's how you paint something rather than what's being painted.   'Bitterroot Barn', 11x14. 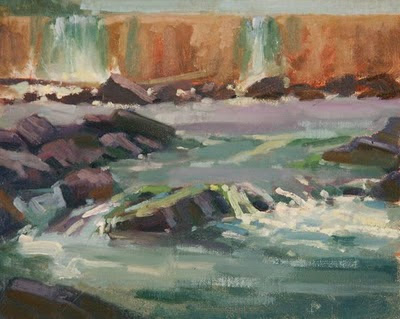 There was just time before driving back to Seattle for another quick one and 'Downstream' 8x10,  sort of popped out of my brush on a cloudy rainy day where I had to shield the canvas to keep it dry.  I enjoy painting water, trying to simplify the complexity of reflections, foam and splash and find ways to make the color both real and interesting.
Posted by Darrell Anderson at Wednesday, November 17, 2010 0 comments 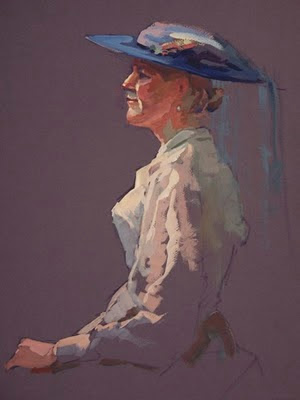 OK.  I admit it.  I'm trying to get people interested in gouache...and I'm also going through another phase of using it more often.

This model decided about two years ago that she was going to dress in turn of the century style with corset, hat pins and the whole works.  Every so often I get the pleasure of seeing her around town looking very stylish and can imagine when everyone downtown looked like she does.  Yesterday she had on a little blue hat, veil and black sturdy shoes that my grandmother used to wear.  She also drives a DeLorean.  I'm not sure how that fits in exactly.....but the two together certainly make a statement. 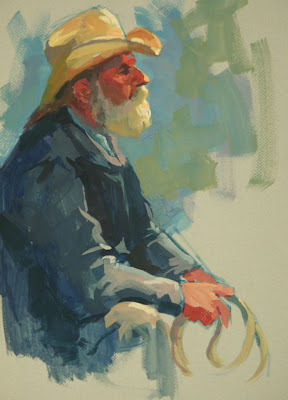 Ron (the color is a little too red) sat for several hours but because gouache works so easily and fast I did this next one of another painter across the room.  They are all on half sheets of Canson paper or an equivalent. 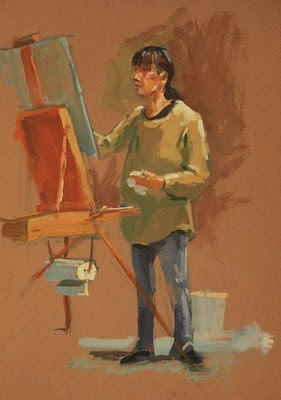