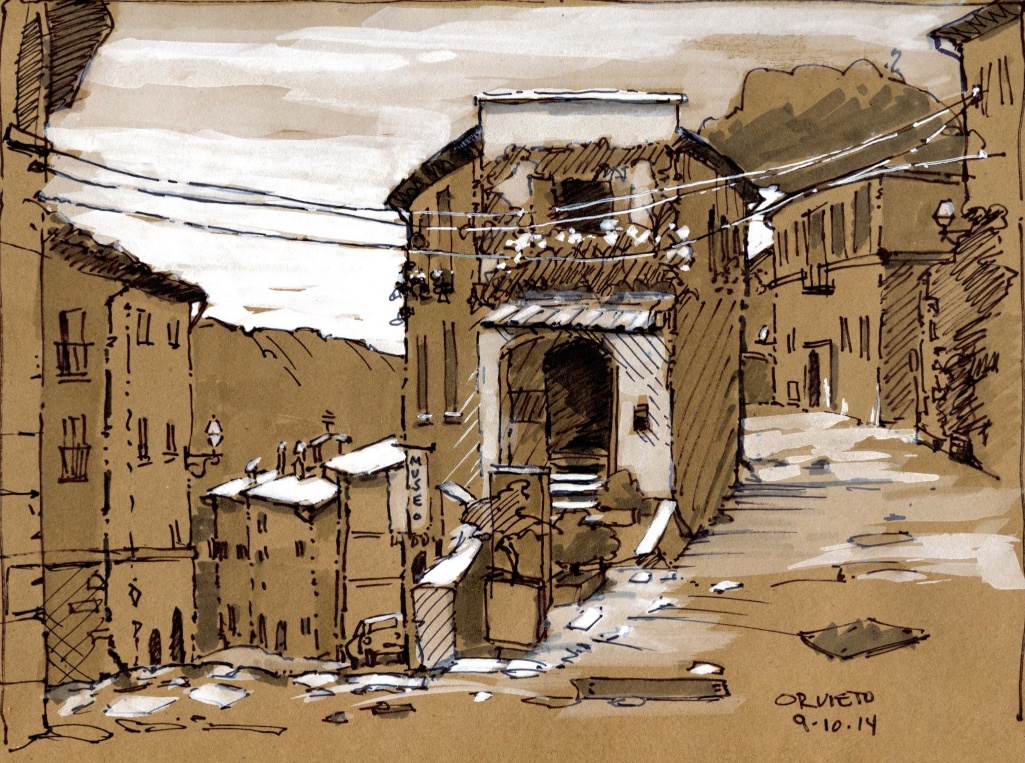 There was heavy thunder and lightning overhead....

.....yet bright low lying clouds in the distance.  It was only a short time before it would rain but I decided to try this one anyway.  I snuck in the last brush stroke just as the first drop of a deluge began to fall.  I hid in a doorway watching the water run down the old cobblestone streets, washing them clean.

I call this kind of thing 'painting with a pen' although I do use markers and some gouache on a brush plus a white pen.  All of my drawings begin with mentally picturing what it will look like on the page.  Then I figure out what is the simplest thing I can find that will form a structure for the rest of the drawing. 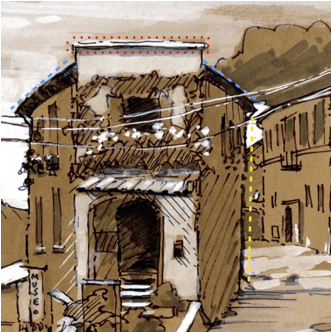 1.  The top of the building....that narrow cornice outlined in dotted red....was the easiest thing to figure out.  I carefully thought through the size, picturing how it would look with the rest of the page.  To aid the composition it was placed just to the right of middle.   A couple of short lines came down from that small rectangle to set up for the next step.

2.  Then the sloping roof line (dotted blue) was done in the same thoughtful way.   The angles and lengths were slight different so I was careful to get it right.  Once the angle and length was in I could draw the overhang.

3.  Lastly, the height on the right side of the the building was placed (dotted yellow).  This was twice as tricky because the pharmacist who ran the shop I was sitting in front of parked her car right in front of me.  Getting it correct involved peering around, over and through the windows.  Fortunately she drove away soon.

After that, everything else could be determined by seeing where it lined up and intersected with what I had down.  The background building to the right, for example, neatly tucked in under, but not touching, the eave of what I had just done.  Kind of like TinkerToys after that basic structure was in.

You will notice that there is no pencil 'sketch in' before the ink pen.  There really isn't any reason not to....I just like the concentration and challenge of putting it down finished from the start.  I make mistakes but they generally get covered up.  Notice how that small bush in the foreground is drawn right over the rectangular box.  I like that stuff.  It says I'm not a robot.

Adding the gouache: I save the straight white paint for the areas that can draw me into the painting.  You know, darkest dark against lightest light, detail against calm.  That is used sparingly.  Most of the gouache is diluted with water to varying degrees.  It always looks intense when first put on but softens a lot as it drys.  Small white accents are done with the white pen.

Tools:  An extra fine point Sharpie permanent pen, a few gray scale markers, some white gouache with a half  inch brush, a white ink pen and a plastic cup with water for cleaning and another one cut off for a 'palette'.  Also a bottle of drinking water.  The toned paper I got at a store....it may have been WMart but don't tell anyone.  Fifty sheets for about three dollars.

Here are some more of the drawings from the Italy trip.  It became easier and more productive to do drawings rather than paint, although I'll begin posting the paintings I got done in a few days.  In the first one you can see some of my color notes in the margin for doing a painting later.  More on that in a week or so. 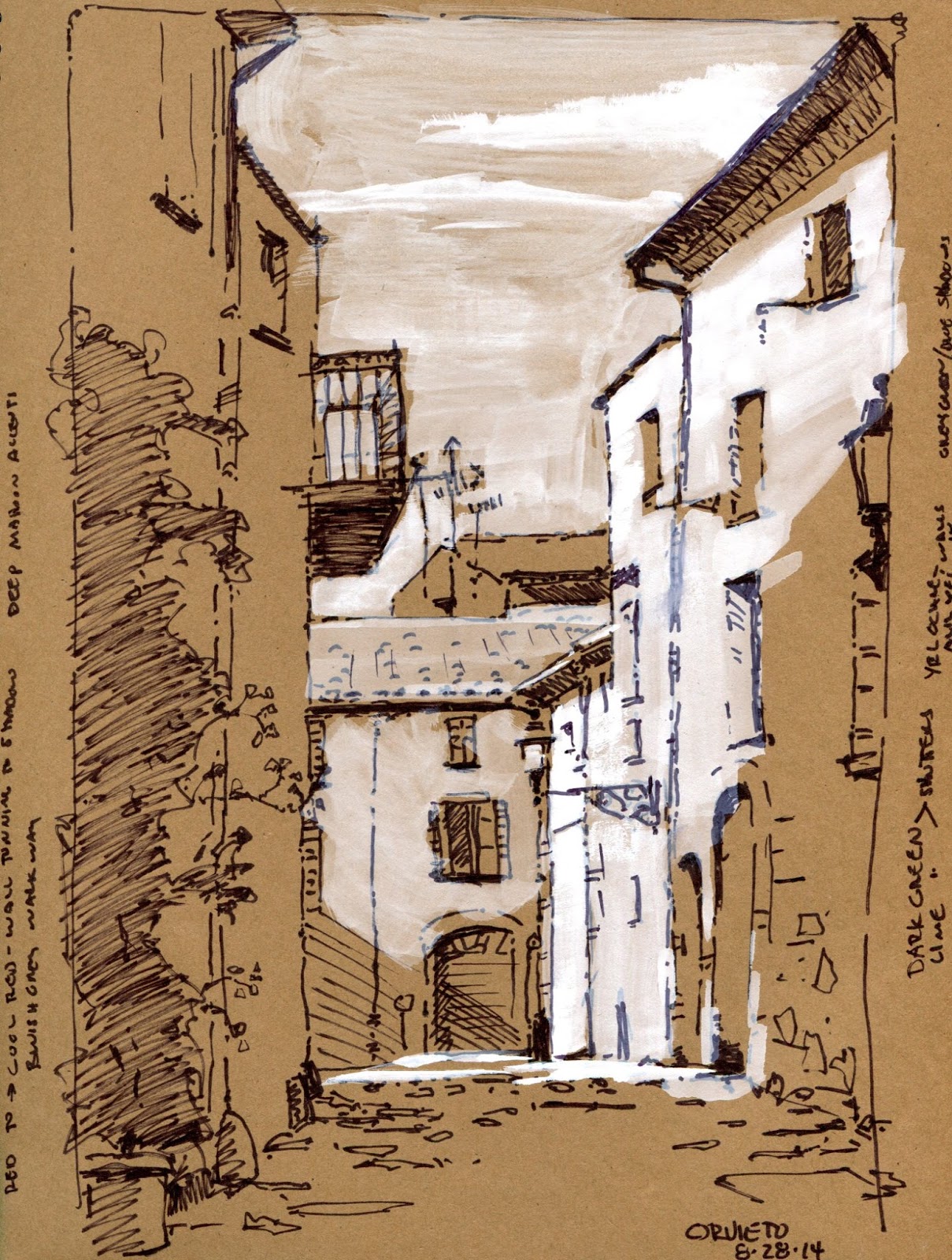 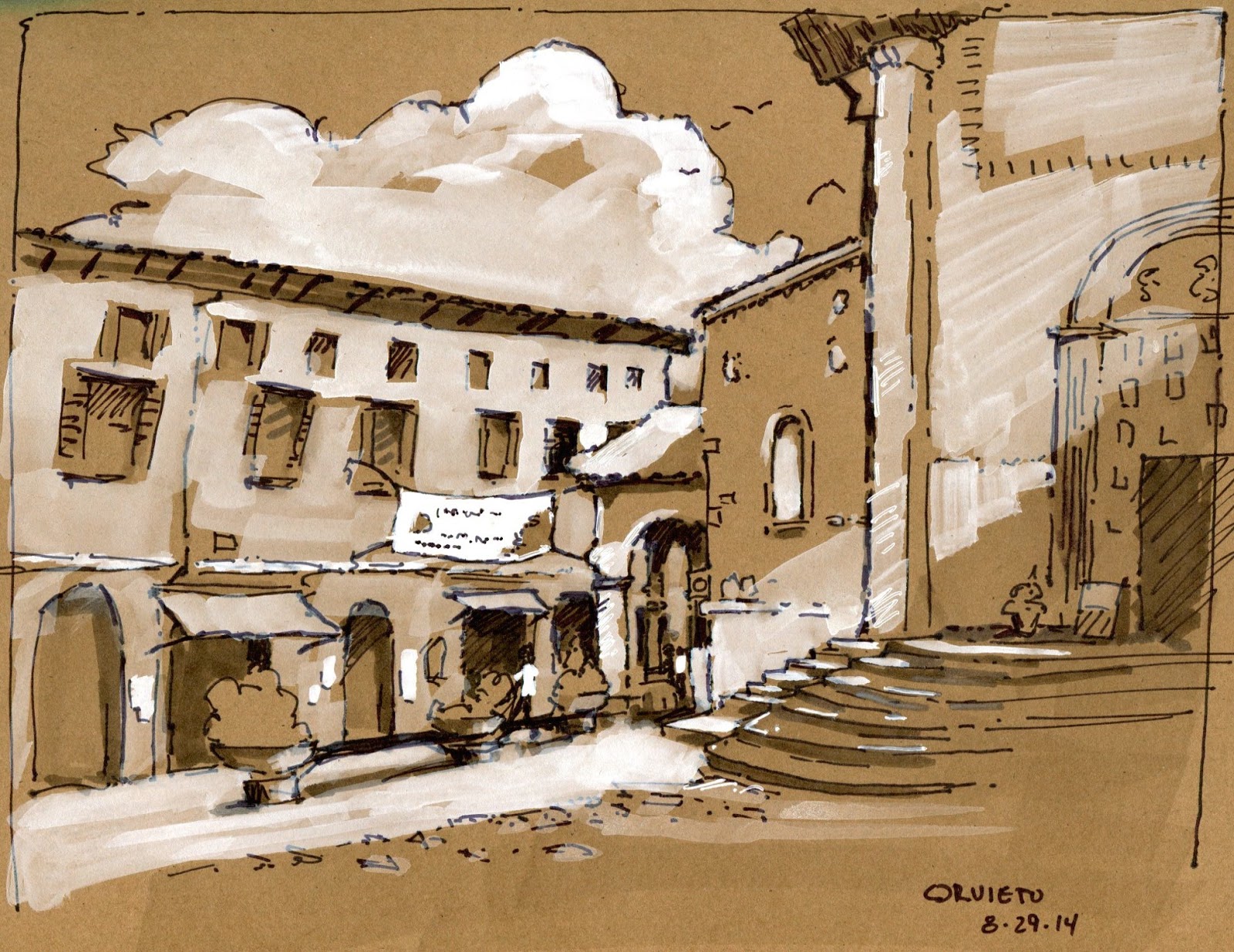 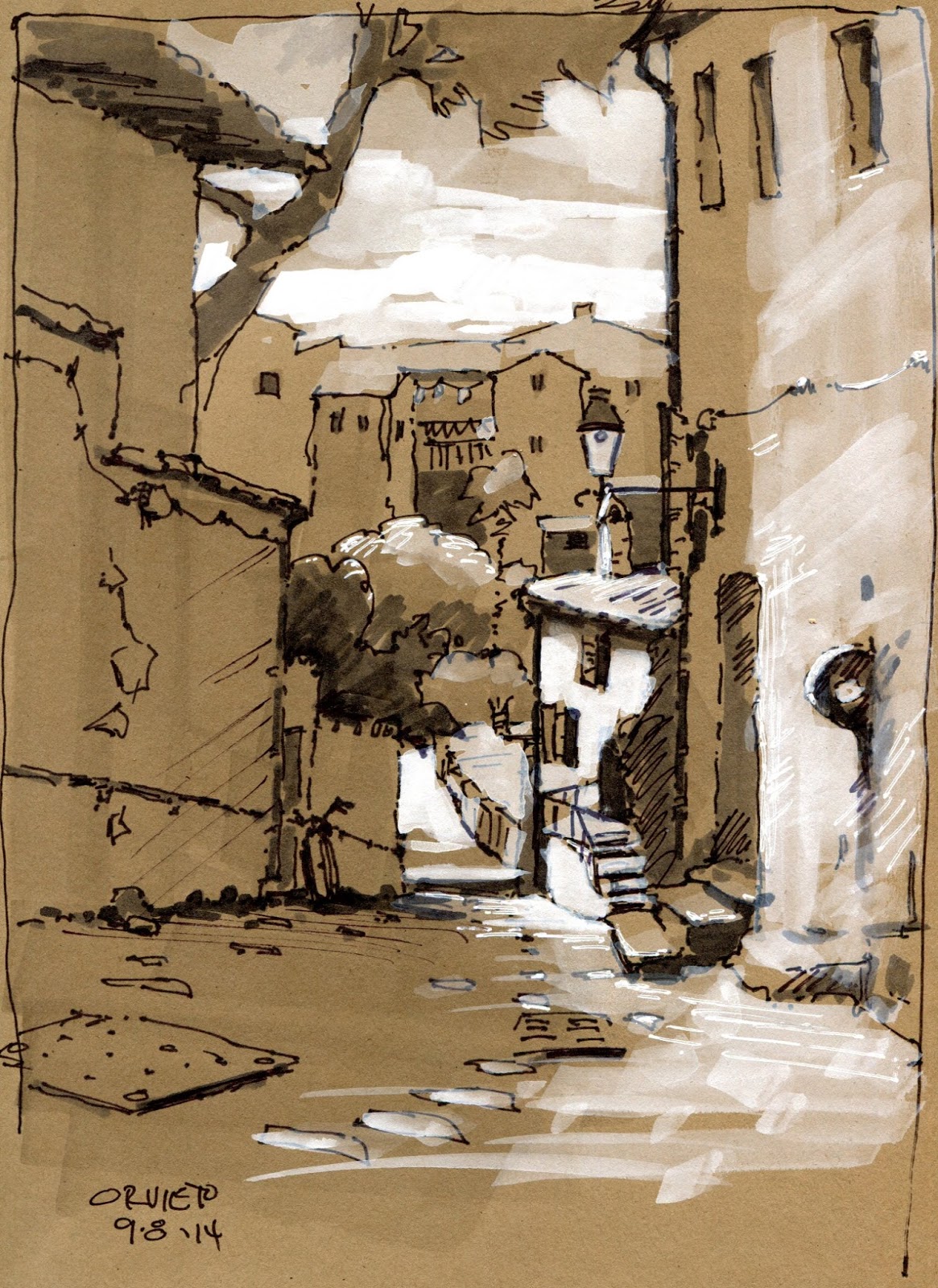 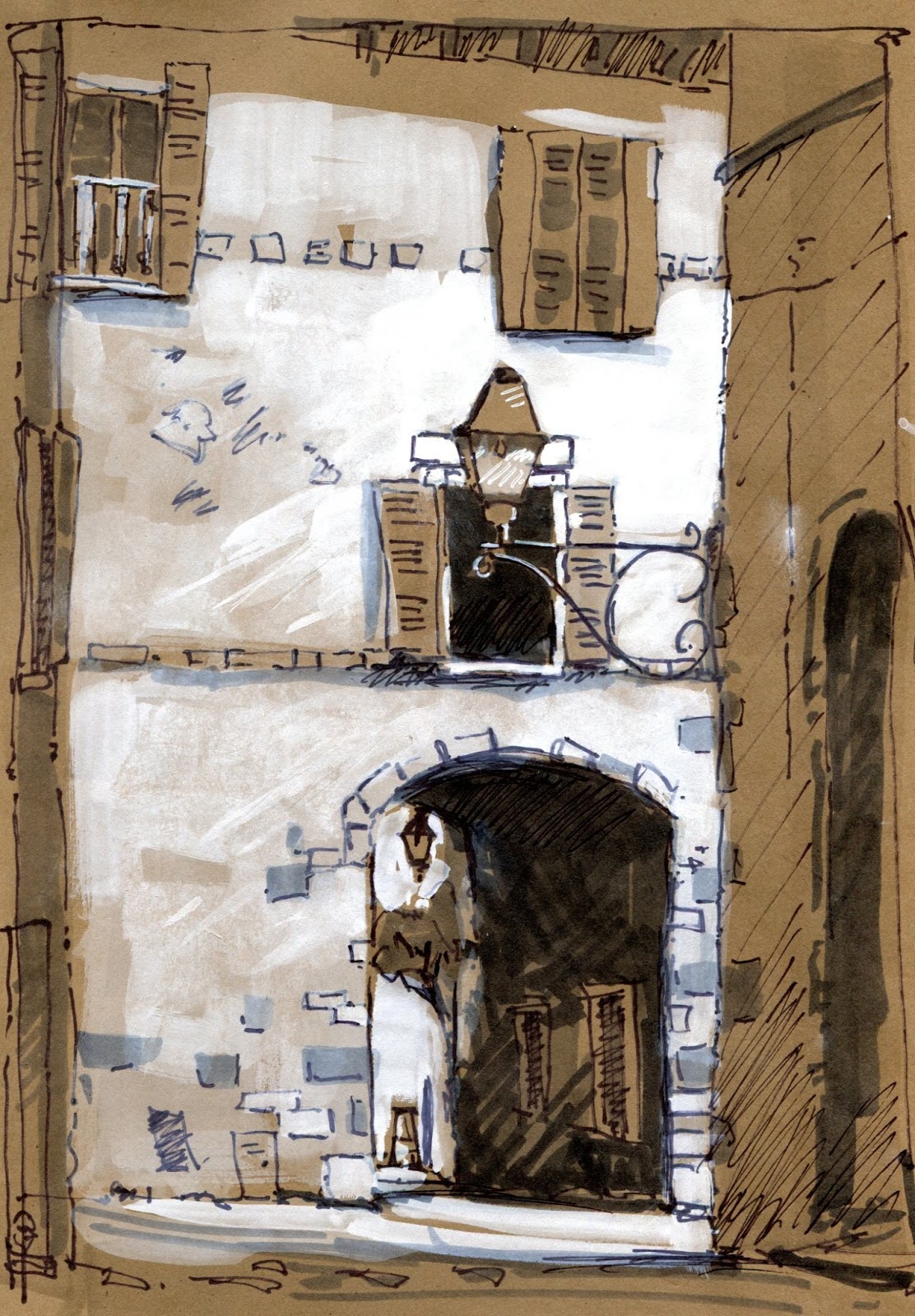 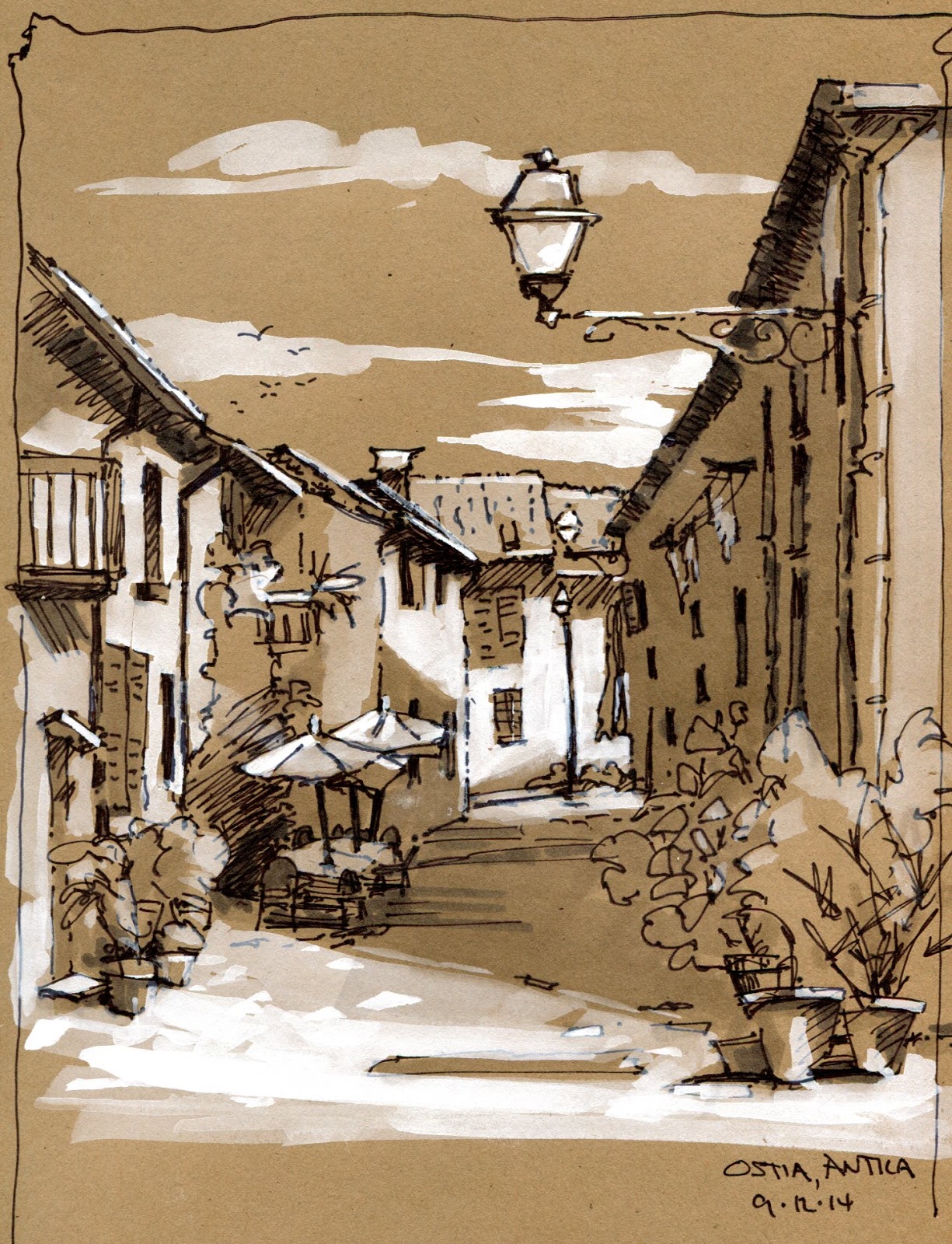