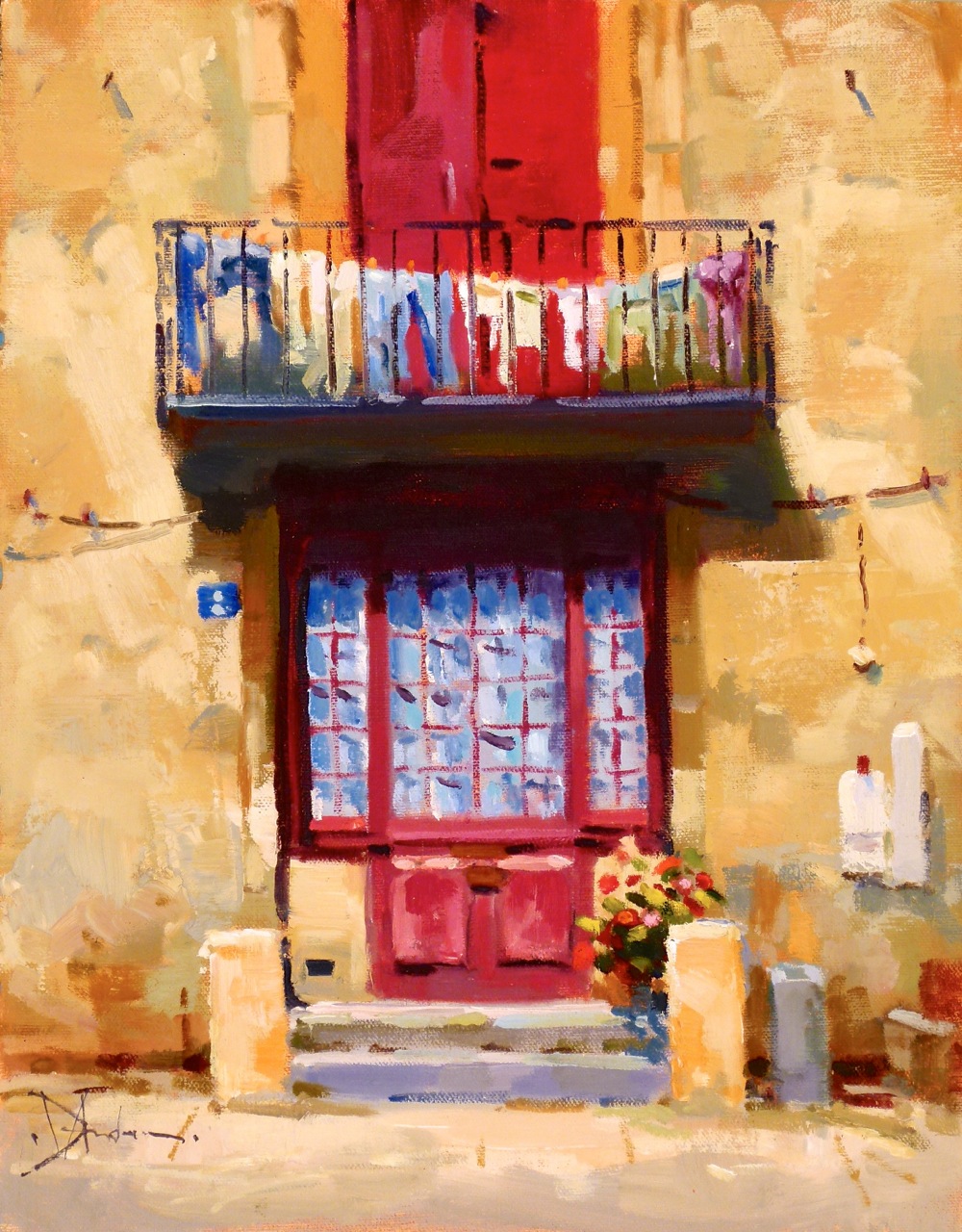 .....for not following our hearts, for not doing what we love, for abandoning our dreams....are plentiful.  'No. 8 Venterol' is a case in point.  For years I didn't paint from photos, believing that I could only paint well from standing in front of a thing....but, where I live, that meant for half of the year I was very limited in my choices.   Not using photos was just one of those excuses.

Now, before you assume I think photos are just fine as sources for paintings, I still believe that the best way to do it is from life.  Only the true colors and values can be found that way.  But.  If combined with lots of plein air experience and awareness of what photos distort it can be rewarding.....but only a few paintings a year come that way from me.

And so that excuse goes out the window.  This painting is from a photo....but one that first became sketches and color studies before brush ever met canvas.  I especially like the way the wall texture came out.

Will Terrell is a cartoonist who puts out YouTube videos so you can watch him work.  The best part, however, is that he talks as he sketches and inks up his stuff.  His words apply to many things in life.  Here is video of him working on one of his field sketches back in the studio......and he talks about those pesky 'Excuses'.  I often like to sit back for 20 minutes and watch him work and listen to him talk.

About ten years ago Will was told repeatedly that he shouldn't be a cartoonist or an artist because he 'just didn't have the stuff'.  He was told his work was horrible and to find a different line of work.  But now he has been a full time, family supporting cartoonist with a YouTube following of around 12,000.  He is worth listening to......besides, he has a great laugh.

.....to demonstrate an initial block-in of a painting and stop....just a large amorphous transparent shadow shape.  I did that and hopefully made the point but, while I was wandering around talking to people, I'd stop and take a few strokes at it.  It was just a pot of flowers stuck in a grey green corner and not really much to work with.  Seemed like a good challenge.

By the time class was over this is what I had which, considering the subject, isn't so bad.  It will have a new owner by tomorrow. 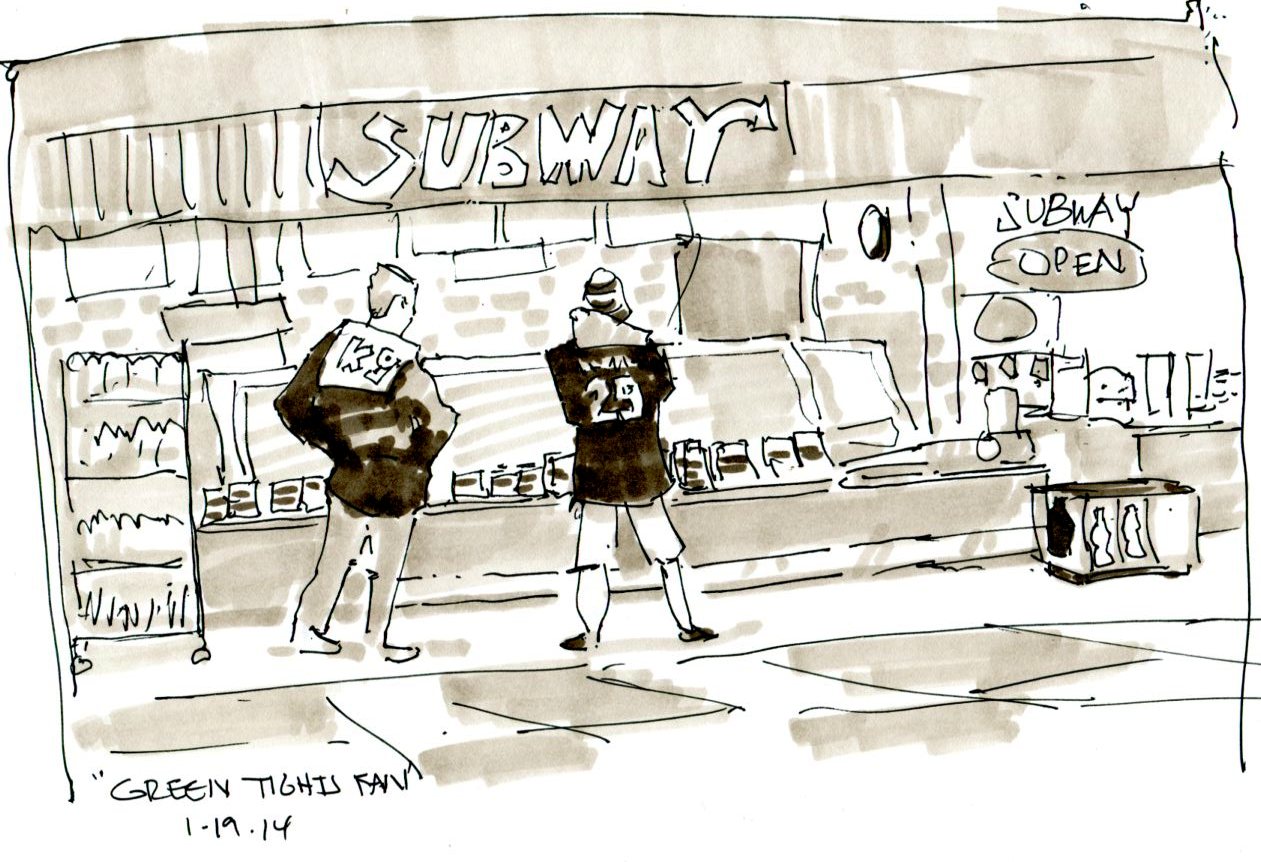 .....and I had to go to Seattle....so I left on the first ferry I could, figuring I'd miss most of the fans heading to the game.  Wrong.  The boat was wacko with yelling fans...and they still had six hours until the game.

With a few minutes to kill, I sat in the terminal and drew what was in front of me, a guy dressed in green tights and a Hawks jersey waiting in line with one of the K-9 cops.  Getting a Subway at some early hour.....

And here is another marker drawing done just before the painting I posted recently.  You can compare the drawing to the painting and see where I decided to change values to make the painting more readable. 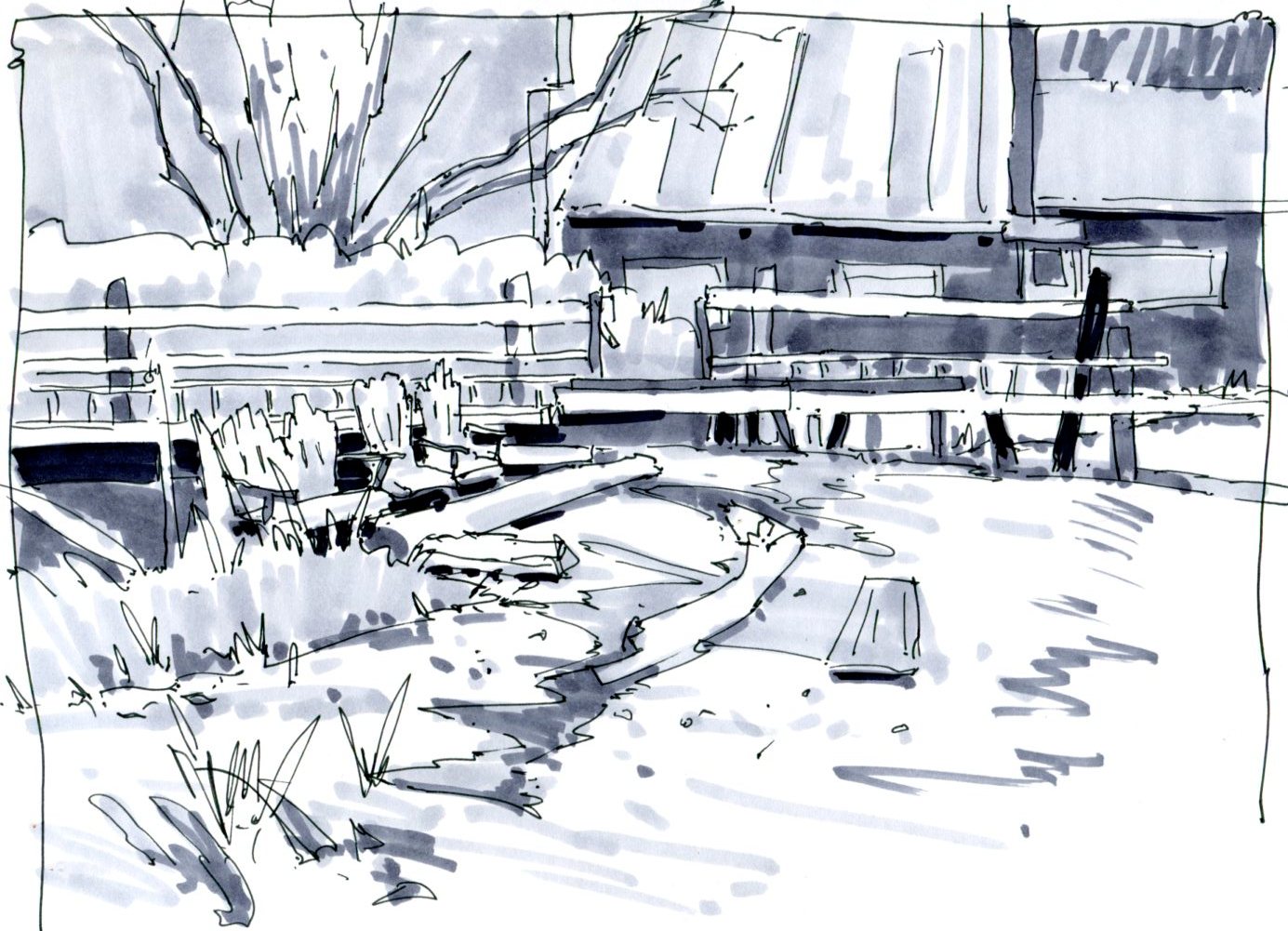 One is in warm gray tones and the other in cool gray.  I once tried mixing the two figuring that was a great idea....but later decided it wasn't.  Sticking with either a warm or cool seems to work the best.  You try.  Maybe you can pull it off.