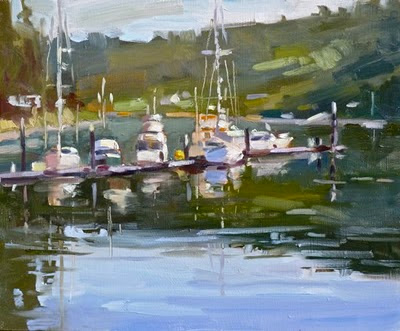 My mother and sister are awesome musicians.  I've seen pianos perk up and stand at attention when they walk into a room.  When I was a kid I went into a music store with them and thought I saw a nervous piano wetting itself....but then I realized it was a leaky humidifier and not a B version of Fantasia.

When playing, my sister goes through a piece once or twice as written and then a look crosses her face and she moves off on her own, using the music only as a guide for what she wants to hear, letting her heart be her guide.  She departs the text, having the skill to do so.

The artists I most admire do this all the time, using reality only as a guide for their own interpretations.  Sergei Bongart, Quang Ho, Cathe Gill, Scott Burdick/SusanLyons, Peggy Kroll-Roberts, Ron Lukas, Bob Phinney are just a few artists whose works have a singular stamp of personality that stems from letting what they see only be a guide for what they want to say.

'Cannery Cove' was a small quickie at a new park on the island while on the way home from town.  In general I like what happened yet have a feeling that 'reality' remained too influential.  I can't say right now (give me a month) what I'd do differently, but there is this sense that this was one where I needed to "depart the text" more than I did.
Posted by Darrell Anderson at Thursday, July 29, 2010 2 comments 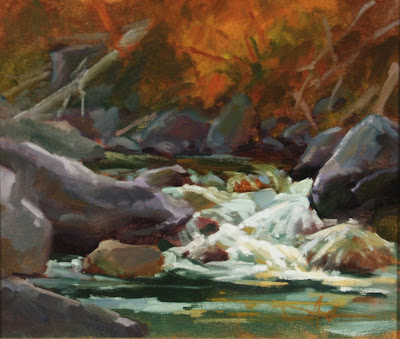 Quinacridone Gold and Fall colors just seem to go together.  This was painted about two years ago and I'm posting it because I've been out of circulation for the last week due to a combination of summer flu and three immunization shots....and I wanted to share something before we take off for Montana.

I also wanted share something because I just ran across an older posting by Robert Genn, The Tyranny of Reality.  If you are an artist and don't know who RG is, you should.  And if you want to read one of the better essays (so many of his are excellent) about creating art, click the link and enjoy.

RG sends out writings about making art and being an artist, and signing up for his postings is free and well worth your time.  A fascinating man and an artist's artist.

I'll try and post something from the plains and forests of MT.
Posted by Darrell Anderson at Monday, July 26, 2010 4 comments 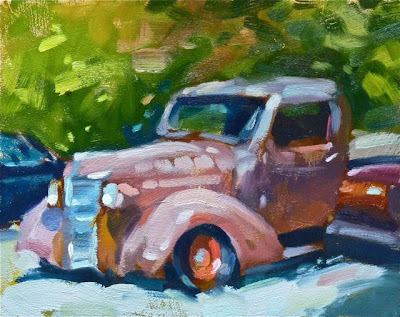 What is it about old things that is so intriguing?  Boats, cars, houses, barns, bridges.....if they have age to them they are more interesting to me.  Is it because there is the patina of history, of human interaction, or the ability to last in a world where everything is quickly replaced?

I don't know if this is a Chevy but it sure seems like a slice of an American Pie past and it was just sitting there in a box store parking lot surrounded by modern cars and shopping carts.  How many shopping trips have those four wheels been on?  How many dreams of the good life have floated around in the heads of its many owners?
Posted by Darrell Anderson at Sunday, July 18, 2010 1 comments 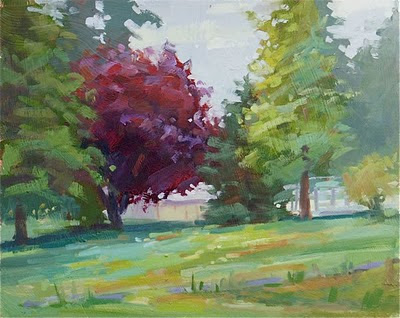 Last Sunday we held the plein air workshop.  Eleven or so watched this one develop and then went off and painted on their own, keeping me hopping from place to place until late in the afternoon.

Painting outdoors is not easy but the group turned out some nice work despite the changing clouds, sun and tides.  I hope they had as much fun as I did.  Here are a few hard at work...and some of that work paying off. 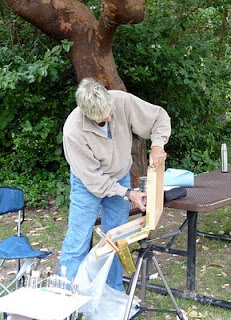 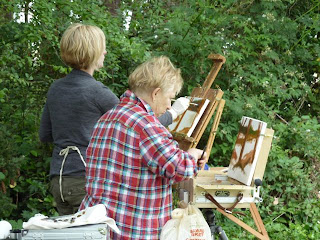 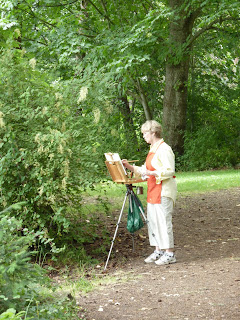 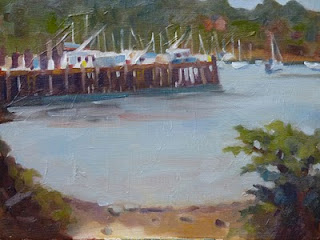 M's Painting:
I especially like the composition and the illusion of form on the dock.  Notice how the water is multiple hues but similar value making it believable yet colorful and interesting. 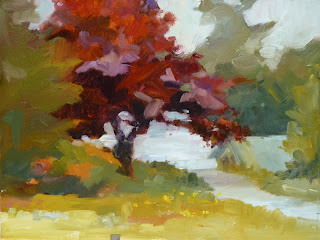 B's Painting:
This ended up very painterly and colorful.  My favorite part is where the roof of the house, the path and the tree branches come together.  It pulls me right in.

Thanks to everyone.  It was nice to paint with all of you....but I was sure tired.
Posted by Darrell Anderson at Wednesday, July 14, 2010 0 comments 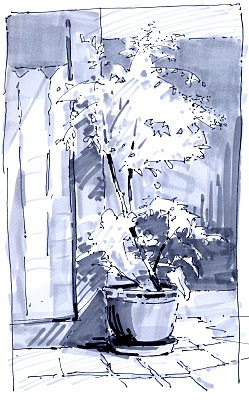 While waiting for the class to experience sketching outdoors with markers I kept occupied with this one.   I entertain myself watching how drawings develop out of blank paper.  It's really an amazing thing how so much can be communicated with a few lines and tones.

People in the workshop seemed pleased watching their own drawings develop throughout the day as they learned this simple yet effective technique.  Here are a few photos from the class and a scan of one of the demos.  They were eleven fun and enthusiastic people.

You can get a glimpse of what the demo setup looked like in a corner of one of the photos.

Tomorrow I'll post some things from the plein air workshop. 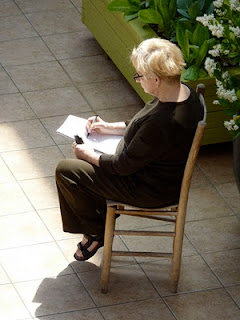 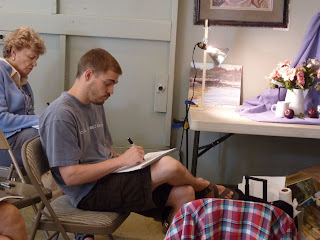 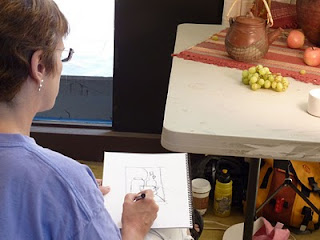 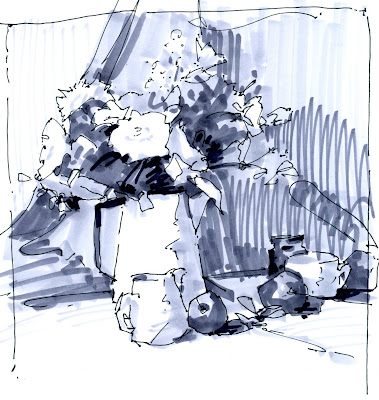 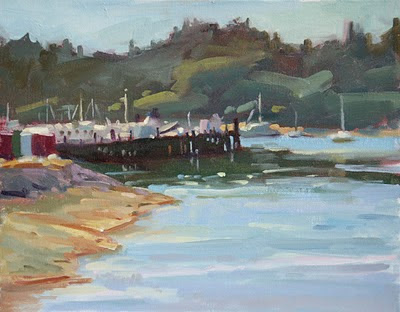 This last weekend it was time again for both the marker drawing and plein air workshops.  To make sure I hadn't forgotten how to paint .... and to find a good spot for a demo ... on Friday I did this one of the ferry repair yard.  It was another of my block in, don't draw paintings.  The dock, the shadowed water and the opposite shore and trees were all painted as a mass with a reddish hue which you can see peeking out in several spots.  I was helped out by a six year old who added, with some help, a few of the strokes in the shoreline.  He and his grandmother were visiting from Oklahoma and asked if it was always so sunny in Seattle.  Snicker, snicker... a week ago we were still wearing our woolies.

Tomorrow and the next day I'll post some photos from the workshops.
Posted by Darrell Anderson at Monday, July 12, 2010 0 comments

Dad! Where Are You? 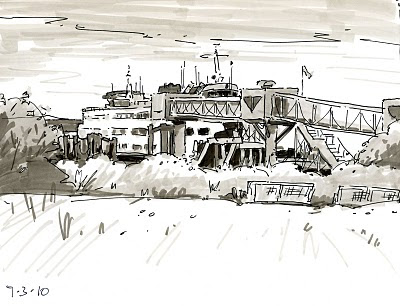 Waiting for our daughter and her husband I sat on the grass and drew knowing full well that it was impossible for them to bus down and make the ferry on time.  Little did I realize that they had just run up the ramp I was drawing and were calling me as the ferry pulled away....leaving me on one side and them heading for the other.  To top it off, it was an hour before the next boat.  So I drew some more...

Value Sketching With Markers
This weekend the final of the new edition went to the printer and will be available by July 12, 2010.  Here is link to a sneak peek.