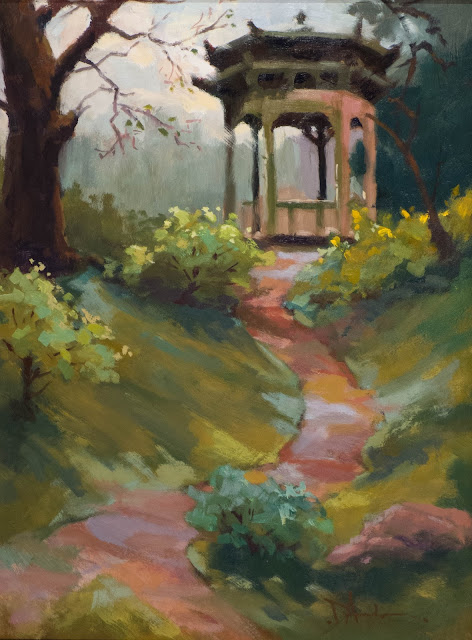 More Than Twenty Years Ago....
....and about this time of year, a group of artists journeyed to China to study in Hangzhou at a leading Chinese art school.  I was lucky enough to be part of the trip.

At that time China was just opening up to the world and many of the revolutionary effects of the Red Guard were still visible.....or weren't visible, having been destroyed.  Wandering around town I almost walked into the local military headquarters complete with tanks, lots of uniformed gun toting guards and full armament.  In the morning some very patriotic message driven music was played over the loud speakers for our wake up call.  This happened around 4:30 AM.  No shower because of no even slightly warmish water.

Breakfast was at 6:30 so we had a couple of hours to go paint or draw across the street in the park by a large lake in the center of town.  We had company as tai chi groups were doing their exercises.  The street sweepers were also out.  Picture small groups of women of modest means sweeping the streets using brooms they had just made from tied together twigs.

Below is a very quick study I did in those early hours and there was something about it I liked and hoped to revisit as a more completed work one day.  That day came about four months ago when I ran across it.....so working from the sketch and my memory the painting above is what I got. 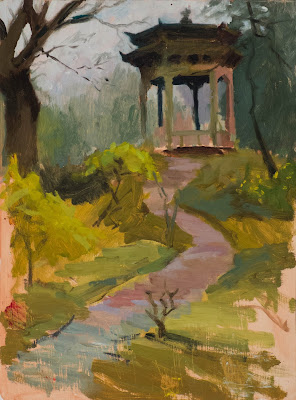 I wouldn't have posted this at all but a member of that trip, Marilyn Webberley, commented on my last FB post and hearing from her brought back good memories of the trip.  I don't remember everyone who was along but Millard Davidson, Robert Moore, Bye Bitney, Linda Tippets, Diane McClary, and Scott Switzer are painters on that trip that I know are still swinging a brush.  Make a comment if you are one of the others so I can add you....

Loved meeting the Chinese students and seeing their work, much of which we have hanging in the house today.  We also laughed a whole lot....about the most ridiculous things. 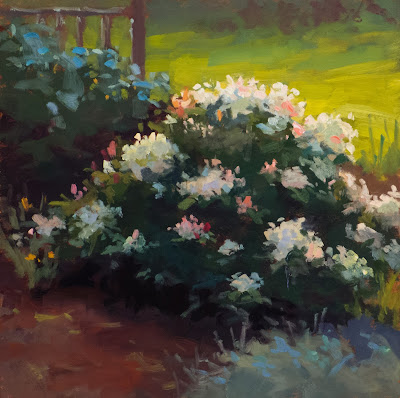 I Had Woken Up Way Too Early.....
.....and couldn't get back to sleep.  I had a need to paint but knew that my schedule that day didn't really allow much time for it.  The sky was barely getting light so I got up for some tea and noticed the light beginning to filter into the yard.  That was exciting.  It didn't really matter if what I painted even turned out if I could just be outside using a brush.

I grabbed a birch panel that I had given three coats of varnish, a nice mid tone to work on and carve out the light.  The rhodie was an obvious choice since it was the only plant in bloom.  Using Burnt Umber I scumbled in the large plant forms enough that I could visualize how the shapes would work together.  Using Pthalo Blue, the Burnt Umber, some Cad Yellow and a little Rose Madder Permanent I began with the darks, varying the mix for interest and form.

About forty five minutes later it was mostly finished and I could finally get my tea.   Of course then  the painting began telling me what it needed and I made a few adjustments.

I had a good time and got some painting into my day.

Thanks for looking!  Have a great day.
Posted by Darrell Anderson at Wednesday, April 25, 2018 1 comments

Over the last few winter months....
.....our small portrait group has met every couple of weeks.  The models are friends from the island who are willing to sit for a couple of hours.  Here are a few paintings from that experience.

'Rodney' works as a designer of large off shore fish farming enclosures.  These enclosures float in the open ocean where currents allow free movement of water, solving some of the problems of nets along shorelines.  He sails boats, rides bikes, makes kombucha and is a very interesting and knowledgeable guy to talk with.  Plus, he keeps my interest up while painting his portrait.

Maybe this should be called 'Sylvia and Friend' because, really, Noelle the Wonder Dog sort of jumped up and settled into that spot on her own.  Sylvia is an old friend who, when not sitting on a couch with a mirror, is usually found painting landscapes or working in her lush garden.  A woman of boundless energy with her fingers in many 'pies'.

'Gary' beats me in darts but I get even in cribbage.  Woodworker, man who loves boats, someone to go to for good advice on most anything and one of the few people who has a backhoe 'just for the hell of it'.  He is an intelligent and very interesting person plus a good friend.

'Grace' is a new acquaintance who I run into at the local farm outlet store where she spends her days selling produce.  Silhouetted portraits, especially ones where the light is flat and doesn't supply many shadows such as in this one, are difficult for me.  It was her stillness and somewhat enigmatic face that kept me going.  The HeyDey Farm store sells the best granola, by the way.

'Jim' has spent much of his life as a bass player for various groups.  He loves the Chicago Blues, Paul  Butterfield and players like Joe Bonamassa.  So do I so we had a lot to talk about while this painting was going on.  He also is a new friend who sends me interesting music vids.

I seem to do my best paintings when I don't draw ahead of time.  By that I mean it's easier for me when I don't use too many lines to define the image.  Rather, I use broad masses of a faster drying neutral color that I can easily paint over.  My accuracy to the subject, whether portrait, still life or landscape, improves when the lines aren't there.

While that may seem counter intuitive, we really see the world in masses.  Lines are a translation of what we see and, I think, hem us in when trying to be creative.  I don't want a coloring book.  A lump of clay seems to have more freedom.....but I love to draw when drawing is an end in itself and not a prep to a painting.

Noelle, Rodney and Gary were done through that massing in approach.  One was over an old painting.  Rodney was over a thin dry surface of Burnt Umber.  Very few lines if any.