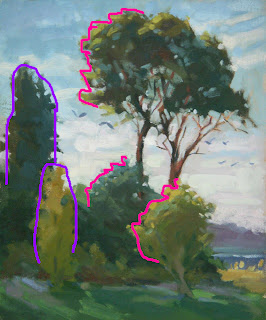 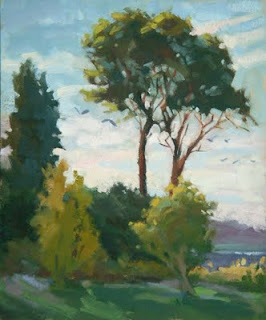 Painting by committee.....what a terrific idea.  Sometimes I overwhelm myself with my brilliance.

(For you new here, this post is a followup to one about a week ago.)

Well, no one mentioned what I saw as a glaring error, so perhaps it wasn't so big a deal after all....but I'm happier with the painting now.  The shapes in the original were so repetitive it bugged me.  Some repetition in a painting is good and adds to cohesiveness but, as you can see in the one I marked up, it was too much of a good thing.

I thought there were several good comments and in the corrected version I tried to include some of them.  The water area is larger, the right side no longer 'falls off', the trees are less repetitive and the enlarged sky area gives a greater sense of height and allows those birds more flying opportunity.  While it seemed like a good idea, I decided not to put in the ice cream stand that K thought should be there.  All those small corrections in shape and size made a more interesting painting to my eye.

With the fourth of July weekend upon us, this is the last post you can comment on and still be placed in the hat for the free painting.  I will be announcing the winner soon.  Good luck to you all, it's been fun.....have a good day of Independence.
Posted by Darrell Anderson at Wednesday, June 29, 2011 5 comments 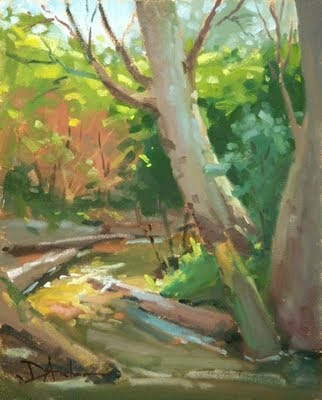 Only one more posting after this one and the drawing for a free painting will end.

This piece, although only 8x10, feels like it should be larger so I'm going to keep it around and see what might happen on a 20x24.  I like the color and the peaceful feeling, probably because it was a relaxed hour sitting by this little stream.  Mallards would peek around that corner to see what we were doing.  The females would float down sometimes but the courageous males never did.

I have gotten many comments this month and I thank you all for them.  Some people felt too shy to post on the blog, but sent me emails instead.  If you haven't posted a comment on the blog....or if you have....do it again.  I've picked out three paintings the winner can choose from.  Here is the blog address.....go post:  http://darrellanderson.blogspot.com/
Posted by Darrell Anderson at Tuesday, June 28, 2011 5 comments 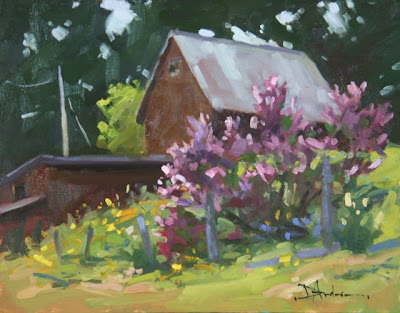 Yellow California Poppies and purple Lilacs, exact opposites on the color wheel so it was only a matter of choosing composition.  Half way through the painting the owner came out with a plate of fresh chocolate chip cookies.  Plein air painting can be so rough....only true grit (and chocolate chip cookies) keep me going.

This painting and 'Speed Bump Ahead'  will be at the Roby-King gallery during July, as well as a few others I've done.

The month is winding down and the painting giveaway is about to happen.  There will only be another post or two before relatives arrive for the 4th and blogging will cease for a week or so.   I still haven't chosen the painting but I think I'll give the winner some options.  Be sure to comment on any of this month's blog postings to enter.
Posted by Darrell Anderson at Saturday, June 25, 2011 3 comments 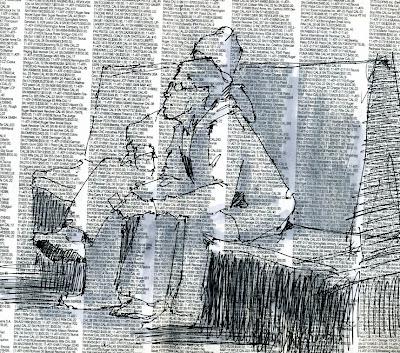 OK.  No, it's not a painting.....but I want to tell you a story and this is the only visual I've got from it.  You see, last night we were coming back from painting and racing for the ferry when the police stopped us.

Well, they really stopped a whole line of cars because they were filming a chase scene through the streets of Seattle....so I missed the ferry.  This couple sat across from me in the terminal waiting for the next boat.  I only had a pen and one marker, but no paper.  So I scavenged in the paper recycling and found something passable.  It sort of reminds me of Don Colley's work.  Sitting across from them was a young man slouched down who looked like a hold over from the beat generation.

Getting on the ferry, I went upstairs to be followed a few minutes later by that young man.  He sat down with his head lowered and I went about my business.  Soon the sounds of a blues harmonica began filling the outdoor room, echoing off the metal walls.  Into his music, I couldn't catch his eye so I let him fill my ears with what became the absolutely best and most creative blues harmonica I have ever heard.

The concert continued for the whole ride and only when we were getting off did I get to talk to him and thank him for the music and, did I forget to mention, the soulful singing.  Is he a professional musician?  Yes, sort of.  Is he a wandering minstrel?  Yes, sort of.  How does he make a living?

He works for the Seattle Opera.
Posted by Darrell Anderson at Friday, June 24, 2011 6 comments 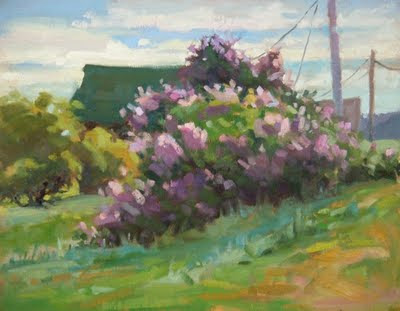 While walking up the street the contrast of the hard edge of the buildings hitting up against the amorphous plants caught my eye.  I've learned that what holds my attention even for a second is something to followup on.  The more I do it, the more in tune I get to what my vision of the world is.  I talk about it in my book on marker drawing....it's actually the point of the whole book.

The uprights of the power poles and their angular support breaks up all the horizontals in the sky, building and land forms, keeping the flow going around the painting.

To enter for the free painting remember to go to my blog at: http://darrellanderson.blogspot.com/ and make a comment to enter.  Every comment improves your chances.  If you select 'Anonymous' as your profile, be sure to include your initials so I can send you your painting should you win.
Posted by Darrell Anderson at Monday, June 20, 2011 3 comments 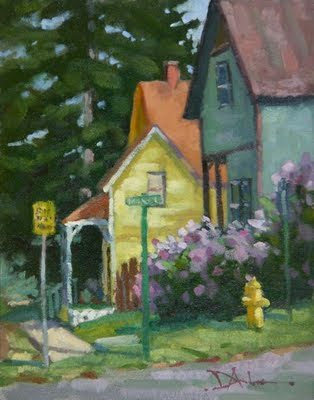 I can't seem to stay away from Roslyn while the lilacs are still blooming.  For once I might get my fill (Nah!).  While the bushes in this painting are rather small, many of the plants are closer to tree size, reaching the height of these homes....all covered in blossoms.  Quite intoxicating for a lilac lover.

There are no right or wrong answers on the composition of the last painting.  Several of you sent great suggestions so I'm going to change the painting and include them and we'll see together if they work.  I'll also tell you what I found to be a problem....but I'll have to do it in a separate post in a day or so.

Going back over the mountains to Roslyn again this coming week.  I'm just getting warmed up.  Remember  that this is painting give away month so make those comments!  If you are shy about identifying yourself there is an anonymous category that you can choose.  Just be sure to include your initials so when you win you can be notified.
Posted by Darrell Anderson at Saturday, June 18, 2011 3 comments 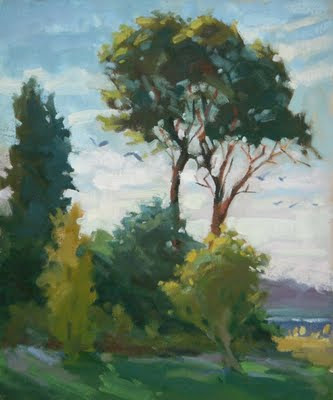 Earlier this Spring, when only the skunk cabbage showed signs of blooming, I painted this in a park in south Seattle.  Concentrating on the silhouette of the madrone (some say 'ma-drone' and some say 'ma-dro-na') I didn't notice what was happening in the composition.

What do you think bothers me?  It's painted pretty well, the colors are good...even interesting...but there is something about the way it was composed.  If you think you know, make a comment and enter for this month's drawing at the same time.  Go to: http://darrellanderson.blogspot.com/ and make a comment.

They say never to publically criticize your own work.  Nuts to that....  I'll let you know what bugs me about this one in the next posting and you can see if we agree.

Another thing...but not about art (or maybe it is).  One of my favorite places on the web is TED where I can hear talks from interesting people.  Here is an inspiring talk by a young man from Malawi who at age 14, in trying to help out his family and village, became an international star.  The human spirit can be so amazing.   http://www.ted.com/talks/william_kamkwamba_how_i_harnessed_the_wind.html
Posted by Darrell Anderson at Wednesday, June 15, 2011 4 comments 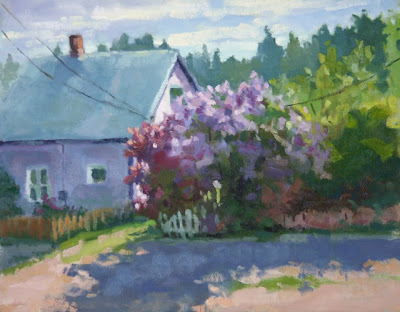 Bluish cast shadow, lavender house and lilacs.  How could I not try the challenge to make it work?

Usually the second painting of the day goes more easily than the first but I had to draw this six times before I got a composition that was passable.   Orchestrating the large blank spaces in the house and shadow also posed a few issues.  Many of those resolutions are too subtle to show up well on the web.  I kind of like the way it came out....especially if you like purple.  What do you think?

This is 'Drawing for a Free Painting' month so enter with your comments at: http://darrellanderson.blogspot.com/.   May the force be with you....
Posted by Darrell Anderson at Monday, June 13, 2011 3 comments 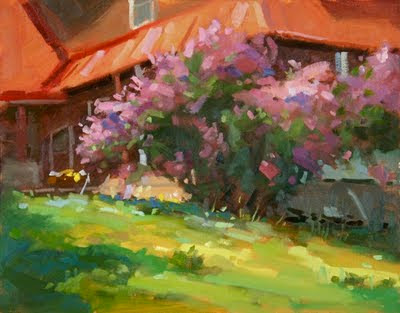 Every year I wait for the lilacs to bloom hoping to spend a week painting them.  Every year something happens to prevent that....rain, wind, projects, emergencies....somehow they don't get painted.  It happened again this year, BUT....

Lilacs bloom later in the mountains...in Roslyn!  It was a happy day that I found that out.   How could anyone pass up a scene like this one?   Last Thursday the smells of spring were everywhere and changing every few minutes as the day progressed.  I loved it.

Remember that this is "Painting Give-Away Month".  You only need go to my blog and post a comment on my painting of the day to enter.  The more you comment the better your chances to win.  I will put all the comments in a hat and draw the winner at the end of the month so the more comments you get into that hat, the better your chances.  (I haven't yet picked the painting to give away.)  My blog is at: http://darrellanderson.blogspot.com/  and "Comments" is at the bottom of each post.  Click on it and make yours!  Good luck.
Posted by Darrell Anderson at Saturday, June 11, 2011 7 comments 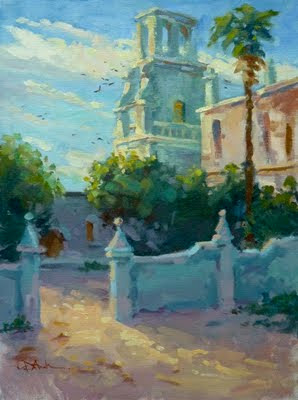 Two years ago on a hot Tucson day, my friend Mic and I stood in the shade and did some studies of this beautiful scene.  Getting home I used the material to do this larger piece.  The other day I ran across it along with the studies and with about twenty minutes work it coalesced into this....which I like.  The field studies emphasized the old cathedral tower but this version, which lets the gate and wall take over, seems to work best.

Remember to go to my blog and make comments this month for a free painting.  At the end of the month I'll draw from all the comments to pick the winner.  The blog is at: http://darrellanderson.blogspot.com/  Click on the word 'Comments' at the end of that days post.
Posted by Darrell Anderson at Saturday, June 04, 2011 4 comments 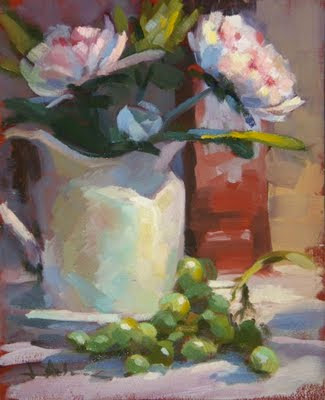 The time has come for another painting drawing!  Some people comment on the flowers in 'Green with Envy', some on the colors in the pitcher, but I especially like the grapes, they have attitude.....hence the name.  Like the last post, this is oil on red gessoed board and is one of my favorite paintings for its color combinations and brushwork.

Enter to win by making comments on any postings I make during June.  Every comment will be an entry to win.  Make comments by going to: http://darrellanderson.blogspot.com/ and at the bottom of that day's posting will be a 'Comment' word which you can click on.  While you are there why not sign up to have my blogs emailed to you if you haven't already done it.  Good luck!

(If making comments is new to you and you are having trouble, drop me a line.  My email is in my profile or on my website under 'Contact'.)
Posted by Darrell Anderson at Thursday, June 02, 2011 9 comments