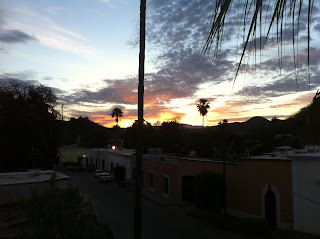 The Challenge of Getting Photos Good Enough to Paint From:
As painters we all know that working from life is the best approach.  Our eyes can pick up so much more than a camera can.  Sometimes, however, there are scenes that just won't hold still long enough for us to grab them with a brush....so we do it with a camera.

Cameras lie.  Not intentionally.  It's just their nature.  This shot, taken early on the last morning in Mexico is a great example.  The sunset was glorious but impossible to paint, even if I had the time.  The scene changes second to second and I don't have a photographic memory.   (that black stripe down the middle is actually the trunk of a palm) 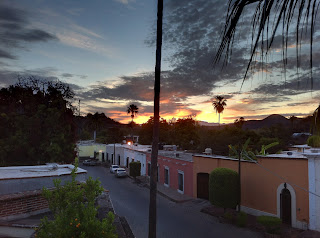 The second shot I believe I could use as a reference for a painting.

The first shot was with the standard iPhone camera.  The second was with one of several HDR apps I have on the phone.  The first takes only one shot with the best exposure it can figure out.  The HDR app takes three photos in quick succession, using differing exposures for the differently lit areas.  It processes the three, combining the best from each into a composite piece.  Pretty cool!

There are quite a few different apps to pick from:  HDR FX Pro, True HDR, Pro HDR, HDR, Top Camera are the ones I have.  Each has a little different twist but they are all inexpensive, some are free.  These photos were taken with True HDR.

Yes, there are drawbacks.  Because three photos have to be taken it doesn't work well for any scene with too much movement in it.  People walking, for example, will have some blur where the figures are.  Still, for most landscape shots, they work great to capture more of what it's like to see with our own eyes.  I'm sure they will get even better.

Yes, they have a little of an 'other worldly' quality about them but I'd rather deal with that than a photo like the first one.

Here are two more taken that same morning.  I think you can see how difficult this would be to get with a regular camera.  (check your camera.  some newer ones have HDR built in)  Snap..... 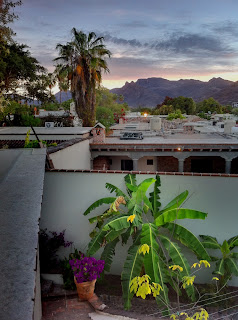 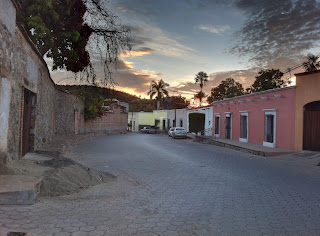 
OK.  Last Mexico post.  I have more paintings but it's time to move on.  Maybe later.  Went out painting today with CG and have new ones to post.

One evening I wandered up to the roof after it had gotten cool enough and did this.....and tweaked it a bit the next night.  I sort of got fascinated with the palms and if we had some around here I think I would be out doing more.  So many colors.

So here is the real reason for this post.   There was this guy who showed up to trim the palms.  In this country there would be a crew of four, a boom truck and traffic cones.  In Mexico an old red Datsun pickup comes down the street.  He gets out his equipment....consisting of three yellow plastic ropes and a machete.  He loops the rope around the tree and begins to climb.  Here.  I took some pictures. 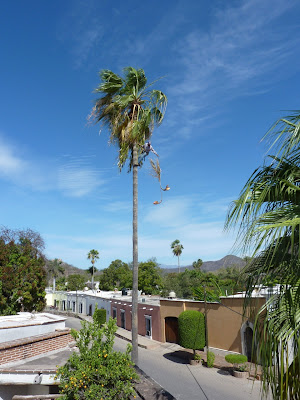 I'm taking the pictures from the roof.  Notice that little guy in the tree?  He's six feet tall.  He's hanging on with one hand.  Insurance?  Workers Comp?  Probably not. 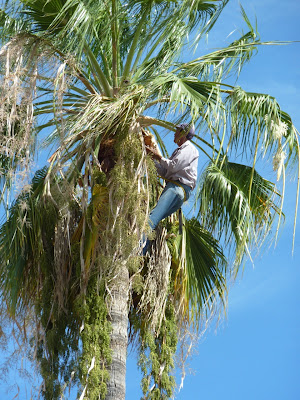 And here you can see that yellow rope lightly looped around his waist and under his butt...sort of.  His feet are in the other loops and he seemed perfectly comfortable, even enjoying himself.  Wait!  I don't see the rope!  What the....??
Posted by Darrell Anderson at Wednesday, April 17, 2013 4 comments

During the rainy season, later in summer, this often has water coursing through it.  On an April morning it was completely dry and deserted, except for myself and a fairly irate possum.

The bougainvillea are hard to believe.  Despite pulling out every red I had, their color when hit by light is impossible to capture....but I could at least get my impression of it.  It was a delightful early morning experience, although the possum and I were glad to part company. 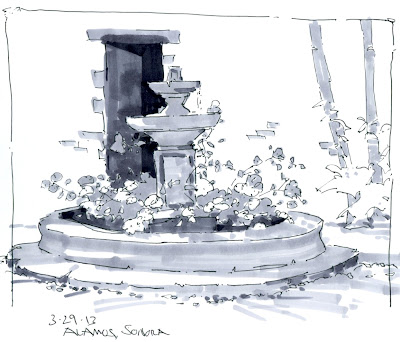 This Saturday's Marker Workshop is almost filled.  If you can make it, please contact the Winslow Art Center and spend a Saturday having fun while you learn.  I'm going to be covering some things I haven't included in other classes and I have a few extra markers for you.  If you can't come at least keep an eye open for an article about my approach to markers in The Scream Online's upcoming issue.
Posted by Darrell Anderson at Monday, April 15, 2013 0 comments


Painted from the rooftop, this evening painting was the last one of the trip.  I was sad to leave because, once again, it felt like I was just getting into the swing of being in and painting in this small town.

I like the abstractness of the large hill.  It was covered with vegetation that had gone dry until the coming rains when it will spring into a jungle like green.  The palms are an endless source of subtle color variations.

The drawing is of some young banana trees in the back of the courtyard and just outside the door where I slept.....oh, yeah....you can see it.   Love those markers for making quick form out of my sketches.  You really should try it.  I just got an order for some new colors for sketching on toned paper which I'll post later. 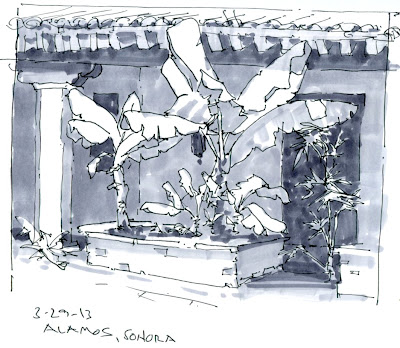 Oh yeah.  Here is one of those baby 18" iguanas that would drop off the roof occasionally next to us.....a bit surprising. 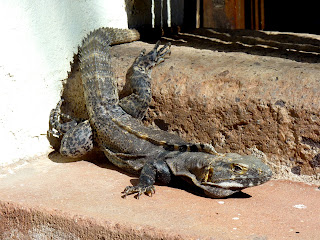 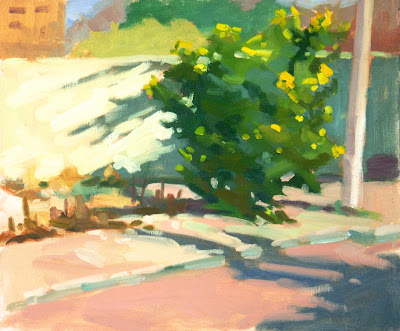 In the drawing below you can just see....way over to the left....something that resembles a bush with a wall behind it and a jog in the curb.  It's titled 'Waiting for the Locksmith', which may tell you something about what I was doing while I did the drawing.  There is a story there....I'll never tell.

The next morning, while my friends Mic and Truman were busy painting a glorious beach scene, I walked back to the shade on the street.  This was fun to paint; simple, direct.  I tried to get all those lines...curb, pole, wall, weeds, shadows....to gently converge on the bush.

The marker drawing was just an exploration of shapes and overlapping form.  Other than the truck, I did it with no real focal point in mind.  It was just a desire to play with the pens but it probably led to the painting on some level.

That also brings up my Marker Workshop to be held on April 20th.  Contact Winslow Art Center for details and to sign up.  It's a fun event. 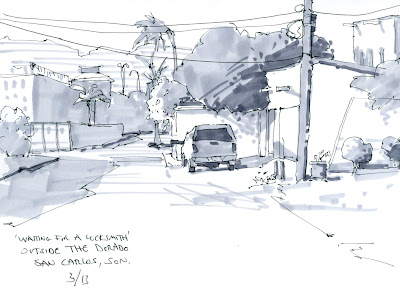 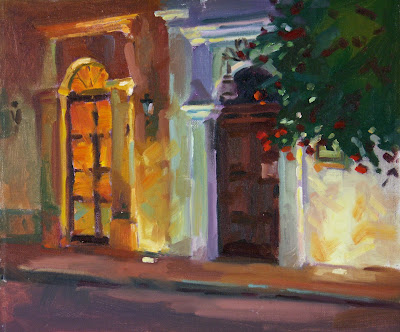 Night painting is such a different experience....because of low light levels I'm never sure what I've put on the panel until the next day when all is revealed in the light of day....like it or not.  Here are two that made it without being scraped.

The doorways were a challenge.  The bluish tones on the right were jarring next to the orange hues on the left.  I had to find a way to weave the colors together so they maintained their identity but still flowed into one another making a whole.  Without that it would have ended up as two paintings on one panel.

'Cathedral at Eleven, 10x12' was a case of blind faith.....quite fitting in front of a church.  My palette was completely dark.  I was picking paint from just remembering where it was on the palette.  Occasionally I shone a small LED light on the panel but it distorted the color and wasn't much help.

This painting could use some more work but I want to keep it the way it is, mostly as a memory of that night and the power of painting by the seat of the pants......or faith.  Your pick.  Besides, I like the strokes.
Posted by Darrell Anderson at Monday, April 08, 2013 2 comments 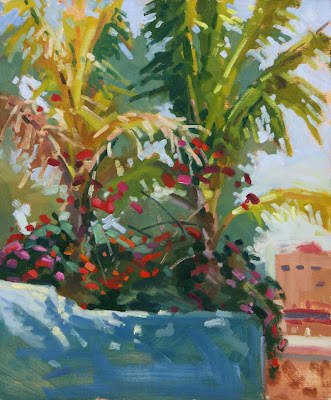 Ever need a winter break and, unexpectedly, find yourself in Mexico painting with two good friends?  No?  So sorry for you.....(he says, gloatingly).

When I go somewhere else to paint it usually takes me up to the last day to begin to see the color well enough to do a decent job of representing the area.  I don't know what happened this time but it all seemed to flow the way I wanted it to.  This is the first one I did on the trip.  I won't post them all, just the more interesting ones.

Lately I've been interested in brushwork, finding that line between interesting paint application and enough accurate description that you have an idea what I'm seeing.   I haven't gotten 'there' yet but with this piece I was satisfied that I'm headed in the right direction.

The next five days are predicted to be rain mixed with low clouds.....you need a break.  Go somewhere and paint. 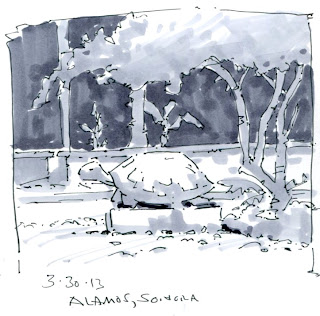 1.  I'm back from Mexico where I ate great food, lived in a small mountain town and painted from dawn to dusk with good friends.  If there was a downside it was that the lady that sold the Tres Leches cake was only in the town square twice.

2.  The Scream Online, an online international magazine for the arts, will be having features on myself and two other artists in their upcoming edition.  The focus will be on drawing...in my case Drawing with Valued Markers.

3.  Finally, for all those who have been asking for it, I will be teaching my marker workshop on Saturday, April 20th at the Winslow Art Center.   I've had wonderful feedback from those who have taken it before so, whether you are a painter, sketcher or dabbler, you'll find something you can use in this course.  It is such a great way to quickly capture the essence of your wanderings in the world.

The drawing above is only two values and white yet so much depth and movement can be expressed.....and in only a few minutes.  I'll be posting more drawings, as well as Mexico paintings, between now and the 20th so stay tuned.
Posted by Darrell Anderson at Thursday, April 04, 2013 2 comments