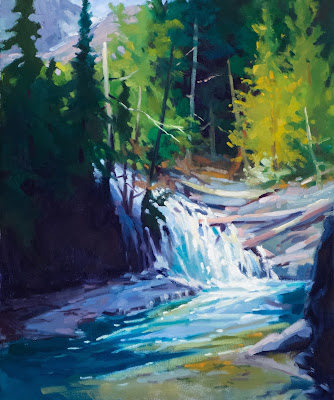 McDonald Falls, Glacier National Park
Late in August several years ago I wandered up a protected side of this river just north of Lake McDonald (it's probably called McDonald River).  Grizzlies had been sighted in this area of tourists for the last couple of days and I thought if I could find an out of the way hidden location I might be safe....and I could hear the bull moose if he came.  This was likely not the best thinking I've ever done....but I am here writing this so....

First I sat down and did one of my value studies in marker to get a feeling for the subject:

You might recognize the drawing and painting from my book "Sketching with Valued Markers".  The drawing immediately pointed out to me that, if I stayed true to the subject, I would end up with a painting that looked like a bullseye.  So.....using artistic license, I tweaked it.

In the plein air painting you can see that I made a light struck 'path' to the Falls, removing the 'bullseye" effect and giving a visual way in.   I liked the piece then and still do.  Yet it seemed that I could do more with it.  It was a more intimate scene than I thought was deserved.  Years went by and I never got back to it.

So, when Plein Air Painters of Washington announced that they were going to focus their yearly exhibit on paintings from National Parks....and that the plein air piece didn't have to be from this year....it seemed a great incentive and opportunity to play.

Waterways meander.  This water comes from snow and glaciers just above and beyond the view I had.  So I pulled out the charcoal and experimented with a more vertical arrangement that would allow more of a story and the inclusion of an 'S' curve....always a nice thing in a painting.

After a few sketches this began to look like what I wanted.  You can't see the mountain snow in this.  It's even hard to see the mountains but they are in the upper left corner.  Looking at the final result you should be able to see the 'S' I was envisioning.

I still wasn't sure if this did it.  Perhaps just a longer format that kept the focus on the river could be good.  Out came the gouache and 40 minutes later I realized that my 'S' idea was really where I wanted to go.  It begins in the snow fields high above, hiding behind the trees before it becomes the Falls and flows out....peek-a-boo is also an enticing thing.  A little sense of mystery.

The final piece is only 20x24.  I thought of going larger but I've been packing to leave for Italy to teach a painting/drawing workshop and simply didn't think I had time.  The PAWA show is in December and, if I get accepted, you can see this painting, as well as many more wonderful pieces at the gallery in Tacoma, WA.

Thanks for reading and looking.  There will be one more post later this week but not again until the end of the month.