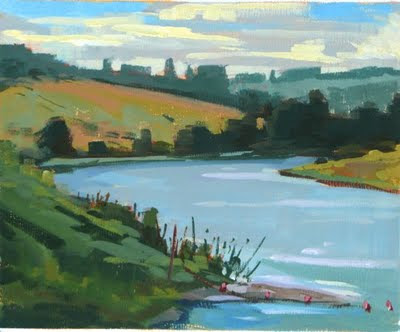 Prince Edward Island was a surprise to me. I had expected an extension of the Maine coast and woodlands. Instead we found rolling hills, small well-to-do farms, and tree lined ravines.

This was my first painting and I think you can get a sense of the land from it. Even though it is a relatively small island there are several rivers of which this is one. The nuances of color don't come across in this photo. In the painting the colors are more intense with subtle differences such as a red hue across the water and in the clouds which barely show up here. I think the color comes somehow from the red sandstone that makes up the island.
Posted by Darrell Anderson at Friday, September 18, 2009