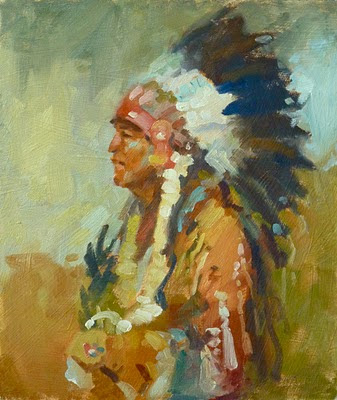 The Montana Painter's Alliance is a group of twenty five talented artists from across Montana who have regular group paint-outs and were kind enough to include me as their guest.  The morning of the second day they had Steve come in from the Flathead reservation in native dress.  Since I have never painted a Native American before this was a special treat.  After taking several five minute poses to get us warmed up, the group and Steve settled on this one and he posed for about an hour and fifteen minutes.

Here is also one of the warm-up sketches.  Of the four or five sketches I liked this one the best but, alas, he decided on the one that became the painting....which I also like but the shapes in the sketch were more interesting and I wished I could have brought it to a painting.  All the sketches, including this one, were wiped away.  This should give you an idea about how these begin.  Actually, there are more lines here than usual.  Enjoy. 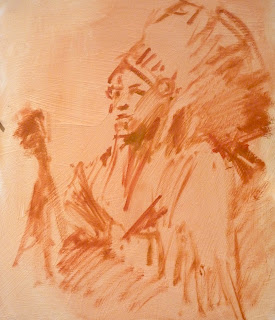