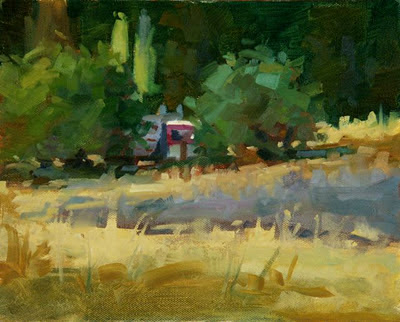 Old trucks have character.  Even if you can't see much of this one you know it has at least one flat tire, a bit of rust and a headlight that doesn't work.....but it still starts when needed.

The zigzag pattern in the grasses  leading back to that spot of red was what attracted me.  This began as thin tonal shapes in the gray grasses, the front shadow,  the shadowed portion in and under the trees and the background area...except where the two poplars are growing.  All else was left white.  That original wash can be seen most easily near the bottom, but there was variation in the color of the tone.  Under the trees it was warmer.

Brace yourself.  More trucks are coming.
Posted by Darrell Anderson at Sunday, October 16, 2011