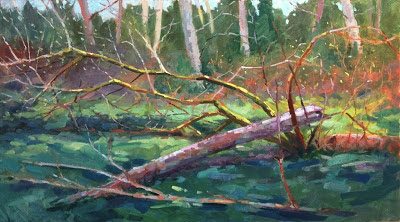 Rob Weiss and I had planned a day of painting yesterday but he got called away to help a friend....so rather than re-figure my Monday I headed once again across the driveway.  Despite many interruptions here is the result, which I like but, of course, if I painted it again I would.....(absolutely never satisfied).

This is one of the larger plein air pieces I've attempted and I don't think it would have been successful without the study 'Caught' from a few posts back.  That was done two weeks ago and much in the forest has changed as well as the light being very different.  All those branches and twigs were fun to paint even though there always seemed to be one more that was forgotten.  So many decisions about what to include and what to leave out.   Just under four hours with a bit of studio tweaking.
Posted by Darrell Anderson at Tuesday, March 05, 2013