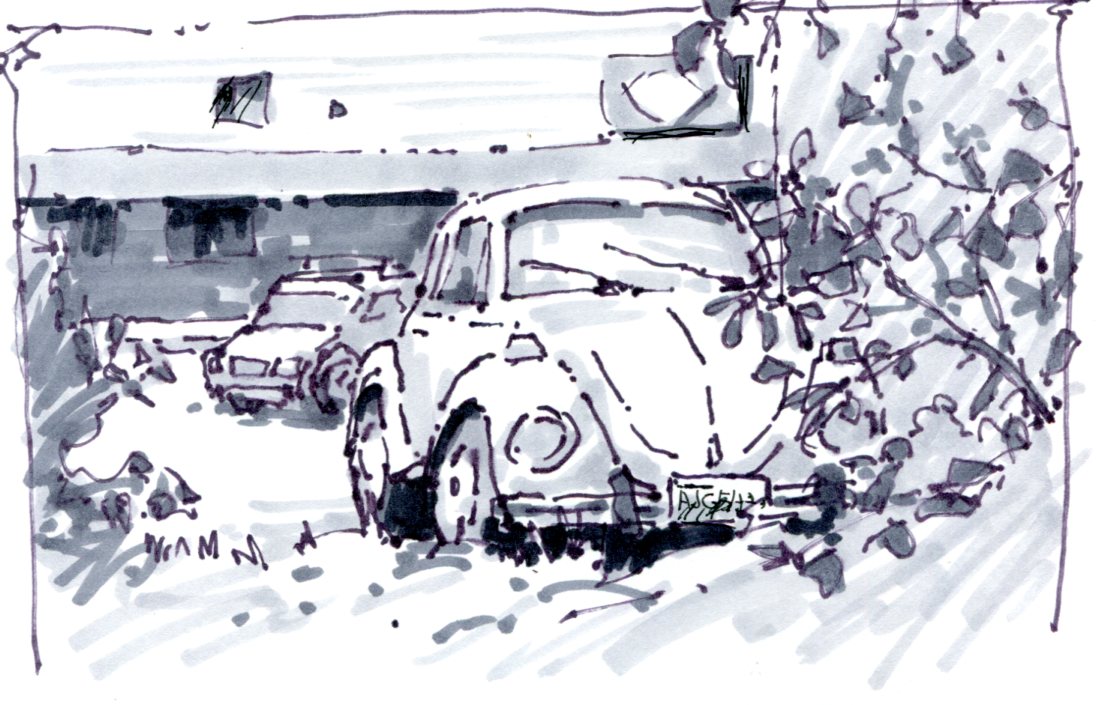 .....simple to complex.  My Marker Workshop is this coming Saturday so I thought I'd get the juices flowing a bit.  There are two spots left if you can make it.  We always have a blast.  Don't worry about materials because for about $25 I can supply you with everything you need.  Find out more at the Winslow Art Center HERE.

Whether you draw something simple or more intricate, the magic of quickly creating the illusion of form on a blank page still happens.  In many ways the simpler forms are graphically more interesting plus much faster to create:

For those of you too far away to attend the workshop and watch a demo, here is a re-creation of how I did the 'Volks' sketch:


So how to begin?  I look for the simplest and most easily drawn part I can find that can also serve as a visual 'measuring stick'.  I didn't know how far to the right the roof line would go but was fairly confident about the vertical rear edge....so that came first.

Looking with care I noted how the shape of the window fit itself into the very first lines.  This is where the whole thing could have gone south on me....so I looked and thought it through several times before going ahead.

As the drawing built itself up it became faster and easier to draw.  I still had to look carefully before putting in this rear wheel.  I imaged what it would be on the paper and placed it in, doing the very rear fender first.  This completed my 'yardstick' for the rest of the drawing and everything else could be more easily judged from that.


It made sense to complete the car before the background or front tree was drawn.  Notice how I made several mistakes on the driver side of the windshield.  I wasn't too concerned because it was fairly hidden behind the tree.


Drawing complete.  I couldn't get all the marker tones erased but you can get the idea.

Now for the markers.  This is where magic happens.  I can't show you the steps in adding the values but suffice to say that I use a 30% gray marker to separate all light struck areas from those in shadow (or dark).  I go over everything with that 30%, leaving the white paper just where I want to maintain the lightest light struck areas.

If you work in markers I'd love to see your drawings.  Later this week I'll post some marker sketches of a friend that uses these tools in a different way.....and the drawings are beautiful.
Posted by Darrell Anderson at Monday, March 16, 2015