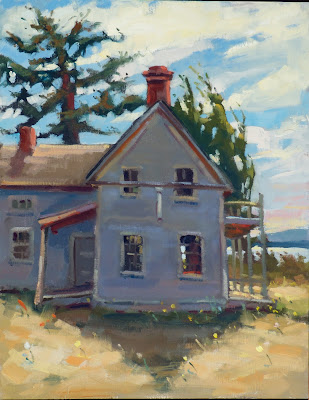 Fort Casey and Ebey's Landing....
....are pretty much next to each other a ferry ride away over on Whidbey Island.  They are both historically foundational to the Puget Sound area and still, along with Coupeville and the local farms, form one of the more beautiful areas of the State.

I spent two days....well, a day and a half....over there with the Plein Aire Painters of Washington and the Washington Pastel Association.  Plans were shortened as I had originally planned to be there the week turning out as many paintings as I could.  My plans were changed and the paintings were limited to six.

This is the second one from the first day; below is the first.  Someone stopped by and told me that this is the second oldest house in Washington and it is Federally protected.  I spent two days there and only saw one person come to the property so I'm not sure who they are protecting it from.... but I'm behind whatever it takes to keep these old structures viable.

The wind about beat me to death but it was very nice to paint all alone.  I realized that I talk to myself while I work, mumbling away and admonishing myself when things aren't going smoothly, asking myself questions about what to do next.  About drove me crazy listening to all that drivel.

Ok.  So here is the view from the road.  A pretty cool place to spend an afternoon.

Thanks for stopping by!