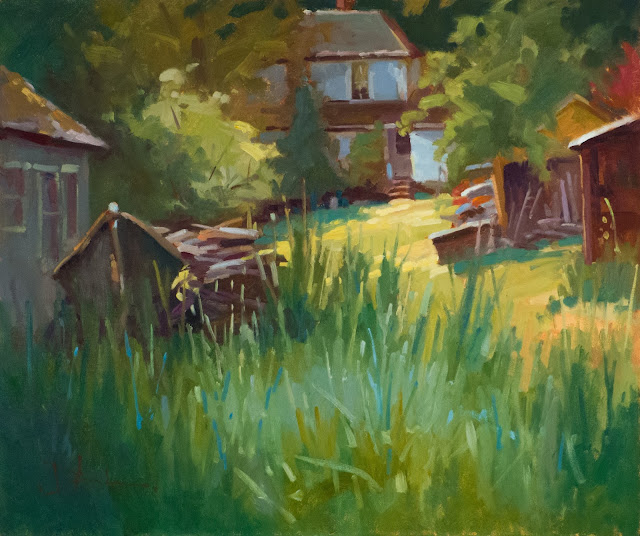 First, There Were Huge Trees.....
....but they were cut down and, at one time, Bainbridge Island had the largest sawmill in the world in one of its harbors.  Croatian, Scandinavian and Chinese saw work.  Japanese and Philipino immigrants saw the possibility of farms and, once the trees were gone, the island became home to lots and lots of strawberry plots.  That led to packing, processing and shipping plants.  Shig's place was one of those farms.

WWII came along and on a sad day the Japanese were rounded up and shipped to camps.  Their well tended farms went vacant and would have been destroyed but for those remaining immigrants to the island banding together to pay the taxes and mortgages until the Japanese residents could return.

Shig was one of those sent off and it was a wars worth of years before he could return to his family farm...and it is still here, a token left by a dedicated island family and rich historical past.  I hope it remains with us and not just fodder for more homes.

I don't think there is a painting I've done that wouldn't be changed if I could paint it over again.  This was my second attempt and probably there are several more in me, so we will see.   The grass in the foreground was a challenge but was a valiant attempt within the constraints of plein air....or my ability to do more.   I like the piece and the experience of painting it.  It's always the light.

It does capture the flavor of the place and hints at the long history it represents.  By the way, the trees have grown back.

Thanks for looking.  More is coming.