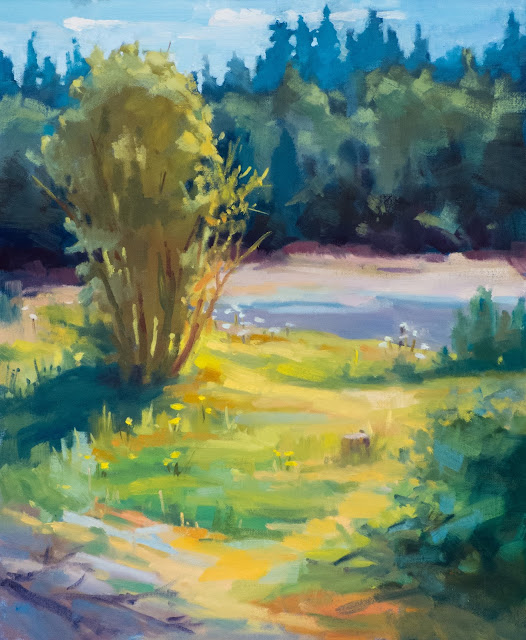 But I have been painting.  This is number 45 since June 10th, although most of them are very small studies which I'll likely share later....right after I finally get a post out about Tim Deibler.   But that comes later too.

'Blakely Back Harbor' has a story inasmuch as it is the the park that contains the remains of what was once the largest sawmill in the world.  According to photos the harbor usually was filled with sailing ships waiting to take on the sawn planks and distribute them to the world.  There was a large town here with several villages within walking distance around it that housed the Japanese, Swedish and the Philippine workers, (plus others).  There was a boardwalk, hotel, stores...the whole shebang.  The back harbor was used to store water and logs.  Once the tide had come in and the water risen behind the dam they built, they blocked the exit and were able to move the logs around more easily.

That is all now gone.  All that is left are ruins, the slag heaps, the pier supports for the boardwalk and the back harbor.  Although usually deserted now, you can sense the bustle of hope, activity and industry that once was here.

Anyway, there I was last week with a friend and figured that I hadn't painted anything of a respectable size in a while.  Having forgotten my roll of paper towels or rags--I had two small used paper towels sheets--I still gave it a shot and adjusted a couple things once I got home.

Hope you all are having a wonderful summer.