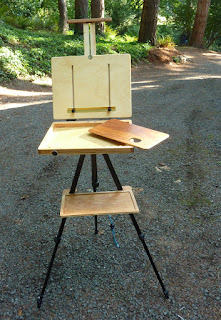 Build Your Own Pochade Box.

Every since posting this photo last summer I have had numerous....like lots and lots....of requests to provide plans or to build and sell this plein air pochade.  I have to admit that it is a very functional piece of equipment and substantially cheaper to make than anything commercial.  Because it uses parts from most any hardware store, should something get lost it is easy to replace.   Excluding the tripod I'm sure this was less than $75.

The picture above is the box just after I finished it.  Since that time it has been to Italy, Montana, Washington (of course) and to many modeling sessions.  When traveling to Italy it went easily into my carry on bag along with most of my clothes....but it can still take an 18" panel.  The pictures below are after a year of use.

Here are the dimensions and many pictures.  I'll try and give you as much info as possible.

What do you need to make it?  I used a table saw for many of the cuts but you could use an electric saber saw or even a hand saw if you took your time.  (I once built a 14 foot sailboat with only a saber saw...it can be done) 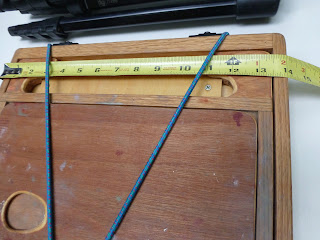 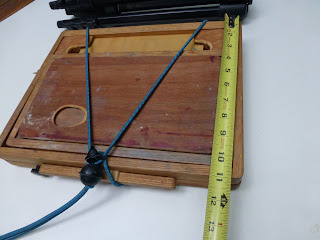 It is 14" wide and 11" deep.  It is held in place by an elastic sleeping bag tie.  The back holds an additional small hand held palette and a tripod shelf.  The tripod is a Manfrotto 715B which is very sturdy and compact but lightweight.  New it is about $125 but mine was on eBay for $45. 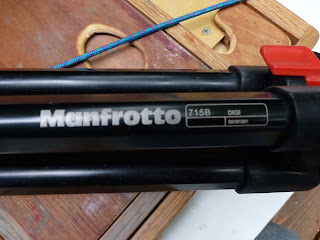 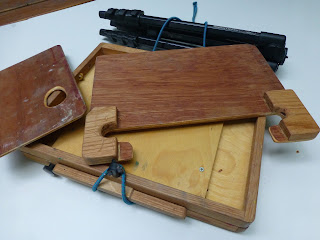 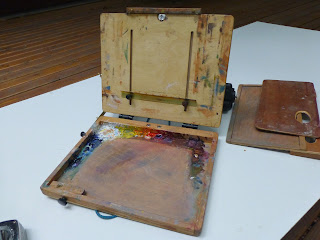 Here it is with a 14x18 panel held in vertical position.  I did an 18x24 on it once in landscape position. 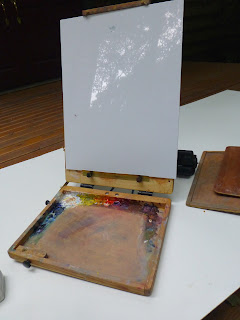 In the lower left corner is a place to mount my iPhone for time lapse shots. 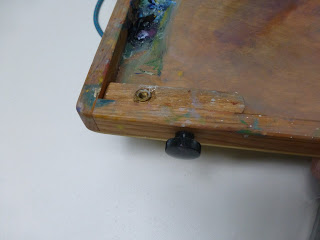 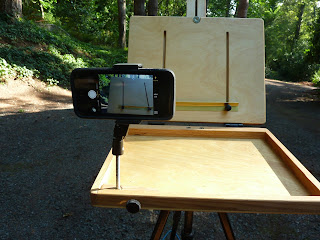 The sides are made of 1/2" oak available from most lumber yards or box stores.  The back piece, because it  holds the hinges and the tripod mounting, is 1". 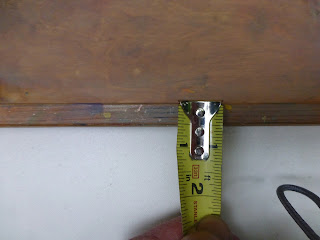 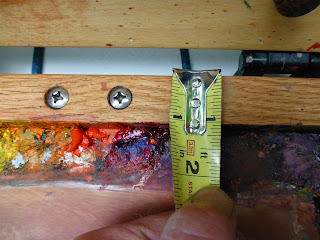 I made mine to be as compact as possible so the height of the sides WITH the birch plywood bottom is 1".  This is the same for the lid.  Actually the only difference between the bottom and the lid is the 1" wide oak for the hinge/tripod support. 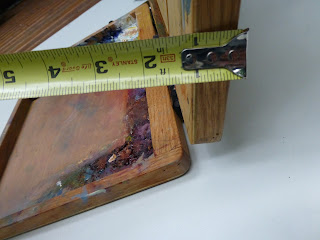 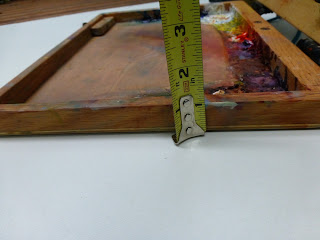 The panel support slider is made from two thicknesses of the bottom plywood glued together before they were shaped.  This may not be necessary for you if you use thicker material.  3/16" would be more than adequate.  I used cabinetry grade birch ply which I think they call architectural grade.  You could use something much cheaper but do get something with a birch surface. 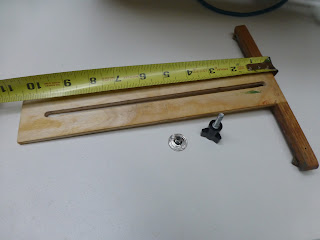 You can see that the upright is about 2.5" wide and 10.5" high.  The top support is about 8 " but it could  wider if you'd want.  I made the slider gap by drilling a hole at each end and then sawing between them on each edge.  A T-bolt slips on the front and a simple knob threads from the back.  That knob is also what I use to anchor the sleeping bag tie to hold the whole thing closed when traveling....and it keeps the extra palette and table in place. 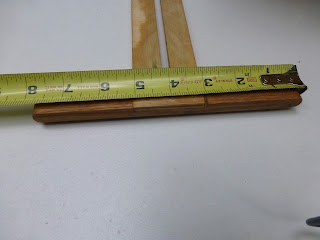 At the end of the cross bar are two small brass pieces held on with screws.  They are more than enough to hold the panels on even in a wind. 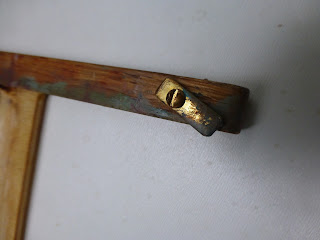 The bottom panel mount is made from a thin piece of brass which I bent and drilled two holes into.  Knobs feed into T-bolts in the back shown below. 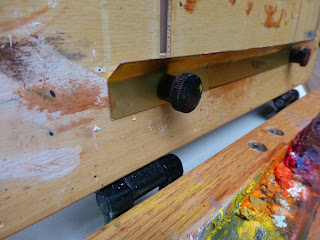 The back panel holds a very simple slot mechanism comprised of T-bolts epoxied into small square pieces of the birch plywood.  That plywood provides the sides and the support to keep the panel T-support from going side to side. 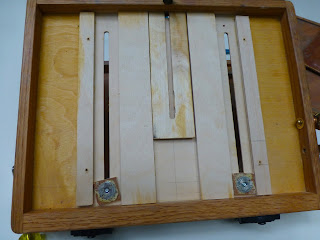 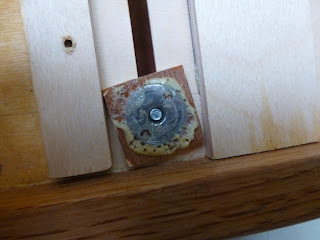 Here are the parts from the back: T-bolt stuck through a hold and epoxied into square, the small screws that hold the back on and the bolt from the front of the box. 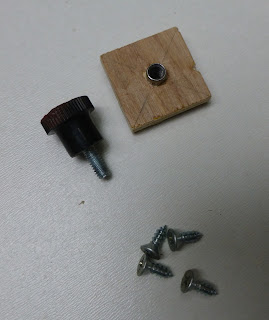 The hinges are from Amazon (HERE) and are adjustable tension hinges (about $17).  They will hold the top in any position.  This works for most panels but later I will explain my modifications. 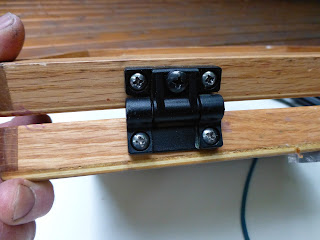 The tripod mount is a piece of 3/16 x 1" steel stock that I cut with a hacksaw and shaped as best I could.  It was tapped for the stainless screws that go through the back palette support and for the 1/4" tripod bolt. 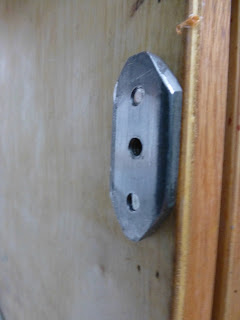 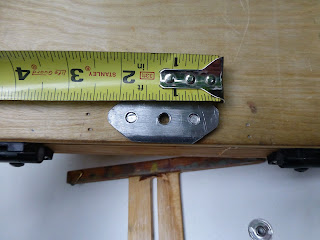 Here is the tripod screwed into it before I've unfolded the legs.  I usually do this before I even undue the sleeping bag strap and get the tripod all set before unfolding the pochade and removing the table and extra palette. 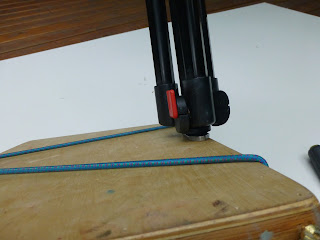 After using the pochade for a bit I realized that the hinges, made of high grade plastic, move slightly when using a larger panel.  It's a bit like the bounce when painting on stretched canvas.  I know they make metal hinges like this that do not move but I haven't found them as yet.  Temporarily I added this side support for extra rigidity.  You can find this kind of stuff in your hardware store. 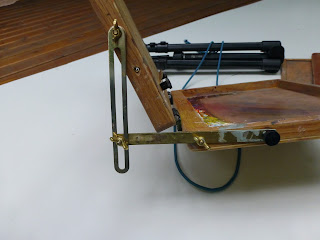 The corners are just butt joints.  I use Gorilla Glue and it's great for this kind of thing.  I use small brads to hold the pieces in place until the glue is dry and then sand off the extra glue.  It is expanding glue and fills every gap. 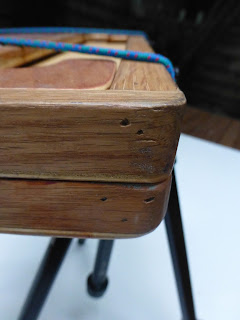 So.  There you have it.  Have fun building and using it.  My only fee is that you send me a photo of your finished box.  Almost forgot.  I finish it with a mixture of linseed oil and thinner in several coats.  It soaks into the wood and, after you have used it a while, the mixing surface becomes very smooth.  Professional!