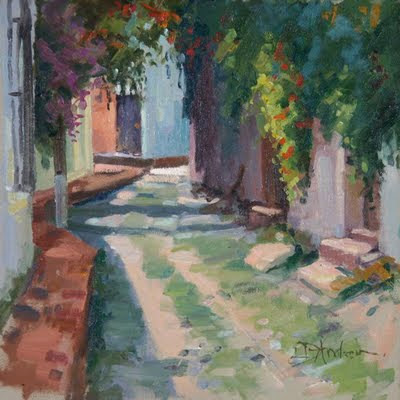 This is another 'stumbled upon' painting that was done a few years ago in Alamos, Sonora, Mexico at the home of some friends.  Originally intrigued by the bougainvillea I began this with the intention of minimizing that door.....only people kept going in and out and slowly it became more interesting.  One person would go in, a different one come out.  It opened for a dog and two minutes later a child skipped through.  This went on for the 90 minutes it took to make the painting.  I have no idea what it was all about.....should have named it 'Sonoran Mystery Door'.

Anyway, I didn't like it and threw it in one of my boxes.  Pulling it out today I have no idea why I originally didn't find some value in it.
Posted by Darrell Anderson at Tuesday, May 17, 2011