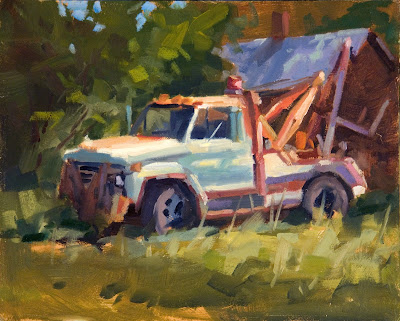 Bob handed me a bit of something and said 'Try this' .  It was beef jerky and, while I don't usually eat red meat, after that bite I was off to find the source, Carek's Meat Market, on a very side street of Roslyn.  I made it there but only after I saw and painted this old working truck sitting in the grass.

I was across the mountains as 'general manager' for the Bitterroot Workshops (general managers have a broad job description), but spent most of the time painting.  Deciding before I got over there that I was going to approach landscape the same way I've been painting figure and portrait, none of the eleven paintings I came back with was pre-drawn in any way.

Most artists do at least a minimal sketch on the canvas before applying paint but I've found that my other work was more accurate and much livelier when I eliminated the drawing stage.  Doesn't seem right but it works.   I'll be posting several of the paintings from the last six days of work and you can be the judge.  I rather like the results.

Oh.  Carek's Meat Market, even if you don't buy anything, is worth the adventure.....and stop by the Brick for a beer while you are there.
Posted by Darrell Anderson at Thursday, October 13, 2011