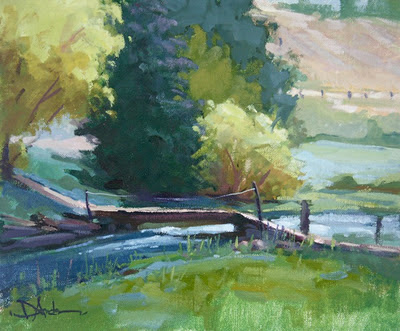 Another rescued!  A couple of people have asked what I do with the culled paintings that have no chance of becoming more than an interesting exercise....(see the last post).  They used to end up in the dump until I saw someone pulling them out one day.  Now they get a splash with a bit of old latex house paint I usually have around....and then they get dumped.  Heartless, aren't I?

Throwing out paintings is one of those sweet/sour experiences of life.  The images always bring me back to the smells and feelings of that painting day.  At the same time I don't want images around that bring to mind my mistakes.

I'm reminded of something I heard about Greg Louganis, the diver.  In the last Olympics he participated in he hit his head on the concrete high dive stand doing one of his reverse flips.  He recovered and went on to gold medal by getting close to a 10 in his next attempt just a few minutes later.  I expected him to be severely injured....which it turns out he was.  When asked if he wanted to see the video of the mistake he said that he never looked at his mistakes, just his successes because those were the only images he wanted in his head.

I'm no Greg Louganis but his words have always made sense to me.

The changes I made to this to save it from the dump were few, all about values.  The more distant tree I lightened.  The purplish light striking the branches of the closer fir were also brought up in value.  The water reflection was simplified.

This will be in the home of 'Bob', one of the stars of the movie 'Old Goats' because it is from an area in Montana he used to fish.
Posted by Darrell Anderson at Tuesday, December 20, 2011