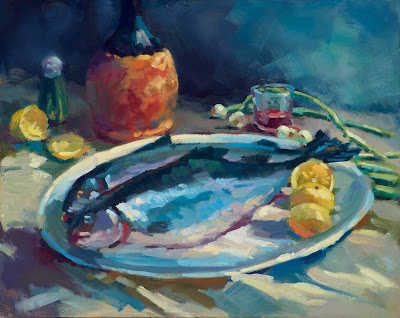 My Only Fish Painting....
....occurred about a year ago because a friend bought a special kind for a dinner.  He ran the risk of sacrificing them by setting them on a platter under warm lights and letting some of us paint them.  Those fish ain't cheap....

So about six of us had a great morning.  I remember using a 2 1/2 inch brush for as much as I could.  When finished I liked the fish but was lukewarm about the composition.  The original had a bowl of fruit on the right hand side behind the platter.  It's size, spacing and color was too similar to the wine jug.

Getting back to the studio I scraped that part off intending to put something else in it's place.  Eventually it drifted into studio obscurity, lost amid all the other canvases.

Last month someone asked me about the painting so I thought to dig it out and take another look.  The hole left by my removal of part of the image gave me an idea and this is what happened.  The onions were in the original as well as everything else.  I added the wine glass.  Not bad.  Obscure enough that it didn't subtract from the fish yet echoed the reds in the head and gills.

I couldn't get around the red of the lips so hence the title.

This is a Public Service Announcement and has nothing to do with painting:
Periodically I've wondered where plants, especially large trees, get all their mass from.  (Isn't that what you lay awake nights thinking about?)

If they got it from the ground they'd eventually be growing in a hole from everything they removed to make bark limbs and leaves.  Nope, not from the ground, except for the water which is admittedly a lot of their weight when alive, plus a few minor elements.

However, after you chop them down and let them dry out they still have a lot of mass after the water is gone.  The fir and hemlock outside our house are four feet in diameter and way over 100 feet high.  Huge amount of material.  Where does it all come from?

Well.  Why didn't I think of this?  It comes from the air.  All that carbon that we can't see but is overheating the earth turns into these huge plants....as well as the small ones.  Nitrogen too and probably a bunch of other elements are in there...but it is mostly CARBON.  (Go HERE to see a video about it)

Go hug a tree.  They really are your friends.