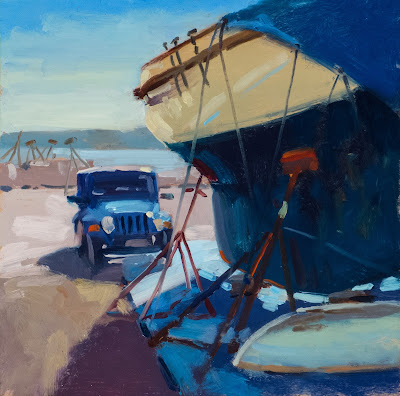 Port Townsend, WA....
.....was originally hoping to be the New York of the West coast back before the railroad had made it here.  Astoria, Tacoma, Seattle, Portland plus some others were also hoping that they would be chosen for the Great Northern terminus.  Located at the top of Puget Sound, P.T. is a beautiful little town of old buildings, hills and ocean views.  It even has a downtown and an uptown (about four blocks up the hill).

The boatyard there is a friendly place of quirky people, small out of the way restaurants and good shapes and ideas for painters.  This last Wednesday I was wandering around trying to find my friend Mick Davidson and stumbled on this scene.  I really didn't care what the objects were because what grabbed me were all those blues.  I got kicked out of my first vantage point, which was good because I think this turned out better. 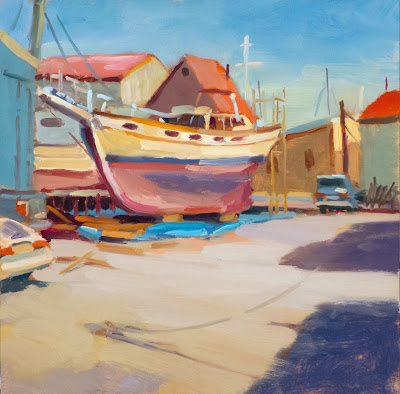 After a very brief break I walked around some buildings and painted this one which is certainly about the shapes but also very much about all those reds.  The advancing shadows of the afternoon kept me speeding along. I think they make a nice flat shape foil for the other objects. 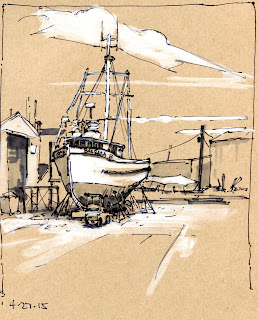 A couple of years ago I drew from the same location....obviously a different boat.  I used the same drawing technique for the painting that I did in the drawing.  The very first stroke I put down was the telephone pole on the right side.  Once in place it becomes a measuring stick that the rest of the drawing can build off from.  Using that pole for comparison I can see where the parts of the boats line up in comparison to the pole.

I also did that in this warm up drawing for the trip this last week.  This time it was the front vertical piece of the fork lift.  Everything around that was placed in comparison....and then the rest of the drawing from those initial objects.  Makes things much simpler....I need 'simpler'.    (Look carefully in the other drawing and the same forklift shows up.) 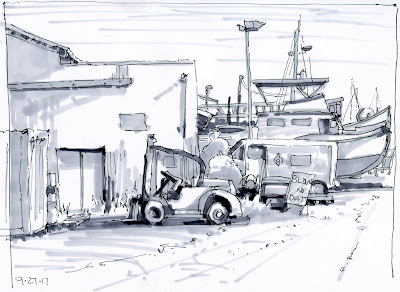